george floyd + 1,000 others annually: justice is not possible, but accountability might help 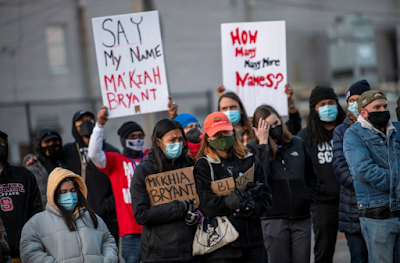 Derek Chauvin, the police officer who murdered George Floyd, was found guilty on all charges. At long last, after millions protested around the country and the world, a police officer was held accountable for murder. Or as one of the memes says, we only had to burn down the country to do it.

In the 24 hours following the announcement of the Chauvin verdict, six Americans were killed by police. That number includes Ma'Khia Bryant. Bryant was 16 years old. She called the police for help. A police officer got out of his car and shot this Black child at close range.

"We won't rest until the killer is brought to justice." If you watch detective shows, that's a familiar phrase. For victims of police murders, there is no justice. Even when there is video evidence of the killing, police murders might as well be lynchings that take place in the middle of the night.

But perhaps if there was accountability -- if there were actually serious consequences for these crimes -- we'd see fewer of them. Approximately 1,000 Americans are killed by police annually. Since 2005, 140 officers have been charged with murder or manslaughter. Seven were convicted of murder.

Black people comprise only 13% of the US population, but are more than twice as likely to be killed by police as non-Black Americans. Brown people are also disproportionately killed.

Black Lives Matter is calling on the US Congress to end The Law Enforcement Support Office -- known as the 1033 Program -- which allows the transfer of surplus military-grade equipment to local law enforcement agencies. This would not de-militarize existing police agencies, and it would do nothing towards a new vision of policing, and it would do nothing to end the racism that underpins this seemingly endless parade of murders. But it would halt a n unnecessary practice which has resulted in countless injuries and deaths. Click here to sign the petition, and look for #End1033 on Twitter.
* * * *
Charles M. Blow: Rage Is the Only Language I Have Left.
* If you are unfamiliar with the Washington Post's police-shootings database, it's a grim, essential tool. Statista is also important tool.
Posted by laura k at 4/25/2021 07:50:00 AM

"Minneapolis Police Use Force Against Black People at 7 Times the Rate of Whites"
"About 20 percent of Minneapolis's population of 430,000 is black. But when the police get physical — with kicks, neck holds, punches, shoves, takedowns, Mace, Tasers or other forms of muscle — nearly 60 percent of the time the person subject to that force is black. And that is according to the city's own figures."

There have been more than 13,000 deadly police shootings in the U.S., according to the Police Integrity Research Group at Bowling Green State University.

Only 106 officers have been charged with murder or manslaughter, according to Criminal Justice Professor Philip Stinson. That's 0.8%.

Only 5 non-federal law enforcement officers were convicted of murder in an on-duty shooting and not had the conviction later overturned, according to the Henry A. Wallace Police Crime Database. That's roughly 0.04% of total shootings - or 1 in every 2,600 killings.