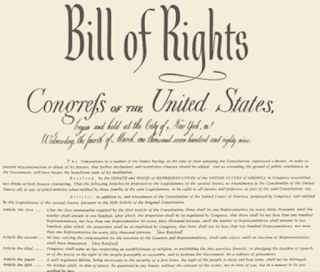 It seems that state lawmakers in several U.S. states need a refresher course on the First Amendment.

It's a very simple amendment, really.

Congress shall make no law respecting an establishment of religion, or prohibiting the free exercise thereof; or abridging the freedom of speech, or of the press; or the right of the people peaceably to assemble, and to petition the government for a redress of grievances.

While the beloved First Amendment has always been selectively applied -- cue the firehoses and Pinkertons -- its intent is quite clear and straightforward. Peaceful assembly and peaceful protest is legal. Full stop.

Despite this, so far this year, 34 state legislatures have introduced more than 80 bills that very clearly aim to abridge and prohibit these inalienable rights. So far, four Republican governors have signed the measures into law. More are on the way.

So far, Florida has passed the most draconian of these laws, creating a new, loosely defined crime called "mob intimidation".

In Oklahoma and Indiana, motorists who drive their vehicles into protestors will enjoy protection and immunity. Similar bills are pending in four other states.

Silver lining: this is the kind of arrogant over-reach that prompts backlash.

Our friends in the ACLU have been documenting this trend for years: the map on this page shows which states introduced anti-protest bills as of 2017. Most died in session, but several have since passed.

These laws are obviously unconstitutional, and are unlikely to hold up in court. However, until that happens -- a lengthy and expensive process -- many or most people are unlikely to risk stepping onto a street with a placard. Those who are both courageous enough and privileged enough to do so, will be at great risk. In Minnesota, for example, anyone convicted under these laws will be barred from receiving student loans, unemployment benefits, or housing assistance.

Plus, some states don't give a shit about court rulings. Anti-abortion-rights laws in South Dakota and elsewhere that have been ruled unconstitutional have not been repealed, and are still being enforced.

The ACLU has also documented how these anti-protest bills -- often called anti-riot or pro-law-enforcement -- are largely linked to protests that Republican-controlled legislators don't like.

- After President Trump enacted his discriminatory Muslim ban at U.S. ports of entry, protests immediately erupted at airports nationwide, including a weekend-long protest at Denver International Airport. In response, the airport started enforcing a rule that requires protestors to submit an application a week before holding any demonstration.

- In opposition to the construction of the Dakota Access pipeline, protestors and water protectors camped out for more than a year near North Dakota's Standing Rock reservation. The protests were effective: They led the U.S. Army Corps of Engineers to deny a permit for the pipeline and delayed construction for weeks. The response? Legislators in North Dakota introduced a cascade of bills that would allow drivers to run over protesters obstructing a highway, as long as the drivers did so accidentally; would punish wearing a mask in any public forum or in a group on private property; would sentence protestors at private facilities with up to 30 days in prison; and would punish protestors who cause $1,000 in economic harm with 5 years in prison and a $10,000 fine.

- In Minnesota, following the police shooting death of Philando Castile, protests caused part of a highway to shut down. Then, at the beginning of the state legislative session, Minnesota legislators drafted bills that would punish highway protestors with heavy fines and prison time and would make protesters liable for the policing costs of an entire protest if they individually were convicted of unlawful assembly or public nuisance.

America was born in the protests of 1765 to 1776. Large crowds assembled around liberty trees and liberty poles, hanging British officials in effigy, and thousands of people paraded through the streets of colonial towns voicing loud dissent against British taxes and other measures they considered oppressive.

These laws are obviously aimed at protests against pipelines and the tar sands -- but not only those. Wondering what is considered "critical infrastructure"? Writing in The Sprawl, Taylor Lambert explains:

There's a list of categories included in the legislation, such as highways, pipelines, railways, refineries, utilities, dams, and so on, all of which have their own legal definitions -- a "highway" under the Traffic Safety Act, for example, includes all city streets, sidewalks and ditches.

In addition to this sweeping list, the Critical Infrastructure Defence Act grants cabinet the power to declare things "essential infrastructure" as it likes. It sounds a bit Pythonesque -- "Look, everyone knows this infrastructure is absolutely, utterly essential, we just forgot about it when we drafted the law" -- but its absurdity doesn't make it any less dangerous.

People who understand what this law does have been more than a little freaked out by it, particularly constitutional scholars, and Indigenous and activist groups.

This law is one of the more blatant and obvious examples of Canada's priorities I've ever seen. You can have your own opinions -- just don't get in the way of property or commerce. If you do, you must be American.

In the US, this follows a long-established pattern of efforts designed to bury dissent, disenfranchise dissenters, and ultimately disappear the people who have the most to protest about.

You kneel in silent protest? Now is not the time.

You gather in front of government buildings? We will expand loitering laws.

You gather in the street? We will kettle you or pen you in.

You want to vote us out? We will curtail your voting rights.

If these measures aren't enough, we will lock you up (mass incarceration) or send you off to die somewhere (the poverty draft).

I wonder what would happen if someone drove a truck into a crowd of MAGA-morons? (By mistake, of course.)