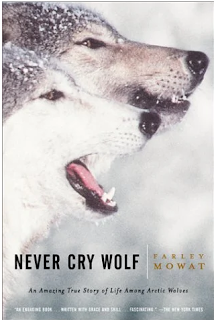 I have read many essays and op-eds by Farley Mowat, the legendary Canadian naturalist, but until now, had never read any of his many books. (He was incredibly prolific.) When visiting Russell Books in September, I noticed a copy of Never Cry Wolf and picked it up. I'm so glad I did! It's a short, easy-to-read book that would appeal to any nature lover, not only wolf enthusiasts like me.

Never Cry Wolf: The Amazing True Story of Life Among Arctic Wolves, first published in 1963, chronicles three seasons that Mowat spent observing wolves in the Keewatin Barrens, an area north of Manitoba, in the Northwest Territories. Farley was originally working for the government, sent to study how to control the wolf population that was supposedly laying waste to caribou herds. Armed with faulty equipment and faulty assumptions, Mowat discovered that everything the government -- and all of society -- believed about wolves was false.

Mowat camped in very close proximity to wolf families and was able to observe them in almost all aspects of their daily lives. His descriptions of the wolves are incredibly vivid, some of the finest nature writing I've ever had the pleasure of reading.

Mowat's writing, in fact, transcends nature writing or any other genre. The first part of the book is a send-up of government bureaucracy, and of academic researchers. It's decidedly over-the-top and very amusing.

Next, once in the wilderness, Mowat writes with awe and wonder for his lupine subjects, and with simple respect for the few humans he encounters. This is the heart of the book. It's a fast and very engaging read.

Then, in a brief third section, Mowat forcefully and eloquently argues against humans' extermination of wolves, and calls on us to heed the facts and change our ways. I'm tempted to share a story from this third section, but it's very disturbing, and perhaps best left to discover on your own.

I won't go into any detail about what Mowat discovered and the myths he shattered. Suffice to say that there are very few wolves, and they kill very few caribou. The tiny percentage of caribou that are killed by wolves helps ensure the survival of the species. Mowat quotes an Inuit saying: The caribou feeds the wolf, but it is the wolf who keeps the caribou strong.

Wolf and caribou have lived together as predator and prey for time immemorial. The threat to caribou is the same threat to polar bears, and whales, and elephants, and tigers. There is only one animal who is a danger to the survival of whole species (including their own), who destroys habitats, who kills for sport, who lays waste to populations. And it's not wolves.

Never Cry Wolf was published in 1963. Since that time, the facts that Mowat wrote about have become common knowledge. Yet wolf slaughter continues, and protections are stripped away or ignored. Without the myth of the bloodthirsty wolf, we can see this for what it truly is. Man kills wolf to eliminate the competition.

Everywhere there are still wolves, the wolf is still in danger.

Labels: animals (other than dogs), environment, what i'm reading, wolves