what i'm reading: ghosts of gold mountain, the epic story of the chinese who built the transcontinental railroad 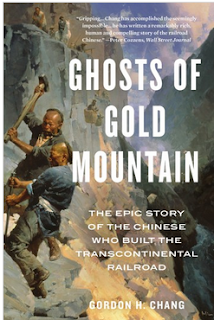 Ever since reading, in 2006, The National Dream and The Golden Spike, Pierre Berton's books about the building of the Canadian railroad, I've been interested in the Chinese railroad workers. Two details stuck in my memory: Chinese workers retaining their food traditions (and the racism and abuse they encountered over this) and that they went on strike. I was excited to know that these underpaid, undervalued, and abused workers organized themselves to fight back.

So when I saw a very positive review of The Ghosts of Gold Mountain: The Epic Story of the Chinese Who Built the Transcontinental Railroad, I immediately requested it from my library. Gordon Chang, one of the preeminent historians of the Chinese experience in North America, writes from an American context, but the story applies to Canada and other countries, as Chinese labour built railroads all over the world.

To say that the Railroad Chinese (as they are called) toiled under difficult conditions would be a monumental understatement. Whatever one can say about those conditions, no matter how hyperbolic it might sound -- it was worse.

Food, water, tents, and any other needs were hauled on sleds and by pack animals, and the costs were deducted from their pay.

(Here's a note about gun powder, then called "black powder," that I enjoyed.

Many of the Railroad Chinese, however, were probably familiar with black powder, which their ancestors had invented in the 9th Century and was commonly used in fireworks, guns, and cannons back in their home region of China.)

Besides the complete absence of safety regulations and safety equipment, there was a total lack of concern for, and interest in, the workers' lives on the part of their employer. Both the Central Pacific Railroad Company (CPRR) in the west and the Union Pacific in the east earned coveted government funds based on how many miles of track they laid, with large incentive bonuses for the company that laid more track. And because everyone grossly underestimated the time and phenomenal effort needed to build the western leg of the railroad, the pressure to work quickly was enormous.

White Americans didn't want these jobs. When a call for labour went out, a few hundred white men might show up, but at the first rumour of a gold strike, they'd be gone. Using Chinese workers was suggested, but the CPRR was reluctant, purely for racist reasons. They considered bringing in large numbers of Mexican workers. They recruited some "freedmen" -- Black people who had recently been enslaved. They even considered using former Confederate soldiers who were still in prison. Finally, they turned to China, and the experiment paid off, beyond anything company leadership could have imagined.

Besides lower wages, using Chinese labour had other advantages for the company. Bringing equipment and labour from the eastern US meant a long, slow, dangerous journey by boat, down the east coast, around the tip of South America, and up the west coast. It was actually easier and cheaper to bring workers to California from China.

Chinese men were recruited by the thousands and tens of thousands. They weren't typical immigrants: they didn't necessarily come from extreme poverty, nor were they escaping war or persecution. This was an opportunity to earn more money than they could at home, so they answered the call. They came alone -- sometimes with people from their region, or with male relatives, but never with wives and families.

They were also the best railroad workers the company had ever seen. Using many techniques they imported from China -- such as building monumental retaining walls without the use of mortar -- the Railroad Chinese worked harder, faster, and more efficiently than their white counterparts anywhere. Even the most hardcore racist CPRR men came to admire both their work ethic and the results of their labours.

But you can't eat admiration or send it home to your family.

Chinese workers weren't only paid less than their white counterparts. They also had no opportunity to advance into higher-paying positions, no matter what their skills or experience. They lived outside or in tents that they procured and paid for, while their white supervisors lived in converted train cars, with kitchens, beds, and other comforts. Their jobs were the most dangerous by far on the project, so they assumed the greatest risk, were paid the least, and endured the worst working conditions.

Unfortunately, despite all this, the Chinese workers earned significantly more than they could in their home province. So they persevered. But not passively.

On June 24, at the height of the construction season, precisely when the company most hoped to make rapid progress, 3,000 Railroad Chinese, in a fully coordinated and informed effort, put down their tools and refused to work. From Cisco to Truckee, almost thirty miles, Chinese at scores of sites and in hundreds of teams stopped working in unison. One news report called it "the greatest strike ever known in the country."

In this bold act of resistance, the strikers may have been inspired by a smaller labor stoppage by fellow Chinese railroad workers in California nearly a decade prior. It was said that in 1859, an unscrupulous Chinese contractor withheld the wages due 150 Chinese who were working on a rail line near Sacramento before the CPRR. They rebelled, attacked the contractor's assistant, and threatened him with violence. The frightened clerk took refuge in the station house and was saved only by the arrival of the local authorities. Through the years, Chinese workers, long after the incident had passed, likely told and retold this story of strength through collective action.

After eight days without work, the workers' food supplies had dwindled, and the CPRR wasn't allowing their suppliers through. Most -- but not all -- workers returned to work. Chang writes:

Though the company did not concede to the strikers' demands, it would be a mistake to conclude, as most historical accounts do, that the Chinese "lost". The workers, in a well-coordinated effort involving thousands, spread over miles of the train line, had defied the company, and it is clear from internal records that the Chinese collective action had deeply shaken the principals. They had also gotten bad press. The company leadership would not forget the confrontation and realized that the workers could never be taken for granted. What is more, it appears that the company also quietly improved pay following the strike, at least for skilled and experienced Chinese workers, over the subsequent months. Wages for them went above $35 a month. Three years earlier, when Chinese first began working on the CPRR, their pay had been $26 a month. For some, it jumped 50 percent higher. . . .

. . . The strike might be understood as being as much, or even more, a clash of cultural logics rather than an incident seen in standard Western labor-management terms. Collective action could be seen as an important expression of will, a matter of achieving "face" and self-respect. The specific outcome was less significant that the act of defiance itself. . . . The self-discipline and organization of the striking Chinese did in fact favorably impress the railroad leadership.

Their wages did increase. And after this, strikes and stoppages by Chinese railroad workers took place on many lines and construction projects in California. That's winning.

There was a moment in time when things looked hopeful for Chinese immigrants in their new country.

There was great curiosity among the public about the Chinese workers, and the press reported on it often. The overwhelming majority of these stories were very positive -- writers hailed the workers' skills, their bravery, and their incredible work ethic. Of course most of the reporting was laced with bigoted language and stereotypes, as was the custom of the times, but the public formed a very favourable impression of the Chinese work force. There was a growing movement for changing laws so that Chinese people could become American citizens.

It looked hopeful... until it didn't. Economic downturn and xenophobia led to scapegoating, expulsion, and horrific violence, including lynchings and the burning of Chinese-owned businesses.

Gordon Chang and his team of researchers at the Chinese Railroad Workers in North America Project, out of Stanford University (where he is a humanities and history professor) have uncovered an astonishing amount of material, despite the daunting challenge of having no first-hand accounts from workers themselves. Tens of thousands of letters were exchanged between railroad workers and their families in China, but not a single letter or diary has survived, or at least none have been found.

Despite this, the Stanford researchers have uncovered a trove of material from a huge array of sources. Chang uses what is known, plus his informed imagination, to create a vibrant tale of struggle and triumph.

The stories of the Railroad Chinese have been forgotten, omitted, and expunged from American history. This book goes a long way towards changing that.