fact: you cannot wave the confederate flag or the swastika flag and rightly call yourself a patriotic american 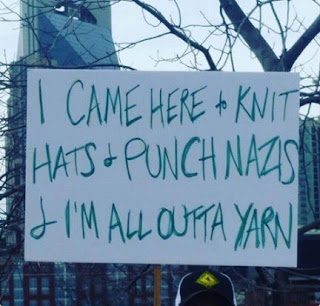 This post has been half-written and sitting in drafts for many months. Days after an armed mob tried to violently subvert the results of an election seems like a good time to finish it.

Here's a statement that should be completely obvious.

In 1861, a group of terrorists attacked the United States. This was an act of war, by a group who would soon be known as the Confederate Army.

Representing a self-declared country, the Confederate Army fought against the United States in a prolonged act of treason that lasted four years. 620,000 people died in this conflict, at a time when the population of the country (excluding Indigenous people) was about 31 million.

Until 58,000 Americans lost their lives in the Vietnam War, more Americans were killed in the Civil War than in all foreign wars combined.

Thus someone who waves the Confederate flag aligns themselves with treason and with enemies of the United States.

From September 1939 until May 1945, the United States was engaged in World War II, often said to be a righteous and "good" war. Along with the Allied nations, the United States fought the Third Reich, also called Nazi Germany. More than 400,000 Americans died in the "European theatre".

I include only American deaths here, as I assume the people who carry Nazi flags are not concerned with the deaths of British, French, German, Italian, Polish, or other people, be they civilians or soldiers.

The Nazi flag was the symbol of an enemy -- a fascist government, an occupying power, and a creator of one of the most horrific genocides in world history. Waving this flag can be construed an act of treason or sedition.

A note about "enemies"

As a person who opposes war in almost all scenarios, I hesitate to use the expression "the enemy". Working-class and poor people were killed, maimed, and suffered devastating losses during these two wars, whether they were from Alabama, Pennsylvania, or Bavaria. Elite Nazis were allowed to retire in comfort in South America, while Nazi scientists were recruited by the US government and lived out their lives under assumed identities. The real enemy is war itself, and the ruling class that profits by it.

But these flags were symbols of governments. Although ordinary people may have adopted the flags and the propaganda that went with them, the flags themselves were symbols of governments and philosophies. Both the Confederacy and the Nazis were the enemies of the United States. They were also the enemies of the stated values and vision of the United States.

Yet some percentage of Americans carry these flags and claim to be patriots.

Although these people have become much more visible in the last five years, their movements are not new, nor are their beliefs.

Do the white nationalists who wave those flags understand this? I'm quite sure movement leaders do. But the rank-and-file militia members, the yobs who were incited by Donald Trump, are not known for their intelligence or their grasp of current events or world history. They live in an alternate version of reality, where Barack Obama was not born in the United States, Hillary Clinton runs a pedophile ring out of a pizza restaurant, Joe Biden is a Communist, and Trump won the recent election in a landslide, among other fantasies.

We know that, to these people, the Nazi and Confederate flags symbolize white nationalism, white supremacy, bigotry, and hatred. This is what drove our abject horror and revulsion at a POTUS declaring "very fine people on both sides" after the violent demonstration in Charlottesville in 2017.

But these flags are also symbols of an imagined past, where women were submissive and servile, Black people were (at best) kept segregated, LGBT people did not exist, and the white "workingman" got a fair deal and had a better life. Immigration was limited to their own ancestors, who (they believe) came to North America legally, spoke English, and quickly assimilated. (PS: not only is that not true, many of their ancestors weren't even considered white at the time!)

So while these flags have come to symbolize extreme racism and a kind of generic hatred for the modern world, we should never forget their original meanings.

You cannot wave the Confederate flag or the Nazi flag and also be a patriot.

What about the trump flag and stars and stripes flying in canadian yards?
Asking about my neighbors

"Voters who elect populist right-wing politicians—and who know they've proposed or support policies that are likely to harm broad swaths of the population—aren't good people forced into a bad decision by a disdain for politics. Harm against those groups are their politics."

Andray Domise, Macleans, May 2018 ("If You Vote For A Reckless Politician, You Can't Claim To Be A Good Person")

American flag in Canadian yard: are they Americans?

Also, is this Alberta? Many Americans who are working in Canadian extraction industries choose not to assimilate.

Agreed. These days I am not sure what "patriotic" or even "American" means.