first celebrate, then organize: good things that happened in the 2020 u.s. election

After the positive result in the US election, so many of my fellow leftists refuse to find joy in the occasion. They seem determined to not admit that something good happened.

The worst president in the history of the United States has been handed his walking papers. This is a good thing!

Does that mean I expect anything but business as usual from a Joe Biden administration? Of course not! But will Trump's ouster improve people's lives? Absolutely it will.

People's lives are more important than Marxist theory. Reform is not The Answer but it is a net positive, and that counts.

Some other good things happened in this election, too.

* The first female Vice President was elected! She is also the first person of colour to hold that position, both Black and South Asian. Does this mean I love Kamala Harris? Of course not! But visibility is important. Diversity is important. This moves the needle. Full stop.

* All four of the Congressmembers referred to as "The Squad" have been re-elected: Alexandria Ocasio-Cortez (New York), Ilhan Omar (Minnesota), Ayanna Pressley (Massachusetts), Rashida Tlaib (Michigan). They are all young, female, people of colour, and most importantly, progressive. 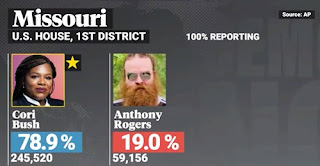 * Cori Bush!
* Stacey Abrams!
* Members of the Navajo and Hopi nations organized and turned out to vote in record numbers, despite very high rates of covid-19 in their communities. This had the direct result of flipping Arizona from Republican to Democrat, and that had a direct result in getting rid of Trump.
* Speaking of Indigenous people, a record number were elected to Congress.
* Sarah McBride became the first openly trans person to be elected to a state legislature in U.S. history.
* Ritchie Torres -- Black, Latinx, and openly gay -- will represent the 15th Congressional District of New York. And if you don't think electing an openly gay man is a Big Deal because it's New York City, you don't know the Bronx community that he will represent.
* Jabari Brisport became New York's first gay, Black, state senator. Brisport is a socialist!
* Mississippi voted to change the state flag, to remove racist and traitorous symbols.
* People voted in record numbers. Slightly less than half of these people voted for Trump, which is deeply disturbing. But increased engagement on the anti-Trump side is cause for celebration.
First celebrate, then organize!
Posted by laura k at 11/08/2020 08:34:00 AM

Thanks to Trump, there are now ways around that (Trump has normalized abuse of 'acting' roles in the Executive branch), but it'd be much better not to have to stoop to Trump's tactics. And it still leaves the matter of legislation to turn things around and prevent future abuse...