11 (more) things on my mind about the protests in the u.s.

In April, I wrote a post called "11 things on my mind about the anti-police-violence and anti-racism protests". For reasons unknown to me, it's one of the most widely-read posts I've written in a long time. So here's an updated list.

1. When governments respond to protests with violence and intimidation, and the protests only grow, a movement has reached another landmark of growth and development. This is happening right now, and it's exciting!

2. Protest by middle-class and middle-aged citizens is so heartening to see, and possibly another milestone. The so-called Wall of Moms, and the "dads" with leaf blowers and hockey sticks, are crucial pieces. Their courage will embolden so many others. No change will happen until and unless the middle-class is onboard, so get onboard!

3. Veteran resistance is so powerful. I wonder about resistance within the active military.

From my work with the War Resisters Support Campaign in Canada, and from extensive reading about war resistance movements, I know that military resistance is always much bigger than civilians might ever imagine. Those courageous men and women are badly needed, right now. 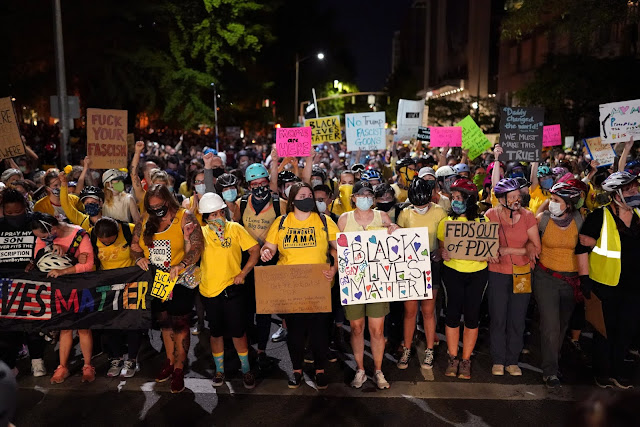 4. I hope organizers are working on tactical nonviolence training -- not because I think protests must always be nonviolent, but because it will build movement power.

Nonviolent protests command a huge amount of attention, and focus attention on the one-sided violence against the protesters. We have a cultural memory of the power of nonviolent protests from the U.S. civil rights movement, and consciously linking the present protests with those famous scenes is strategic and powerful. I'm not inside the movement on that level, so I don't know if this is already happening, but I hope it is.

5. People are educating themselves about racism. Books like How to Be an Antiracist by Ibram X. Kendi and White Fragility by Robin DiAngelo are on bestseller lists and have long hold queues at public libraries. Libraries are posting antiracism reading lists. Antiracism book clubs and discussion groups are popping up. This is amazing and so beautiful.

6. A repeat from that April post: the US was founded on protest. Every important, positive change in the United States has been born of protest. Protest is as American as racism and gun violence. Which is stronger? We shall see.

7. How far will the crackdown go? How far down the spiral into a police state will the current occupant of the White House and his lackeys take the US?

8. What will Trump do when he loses the election? If enough people vote to counteract all the fraud, vote suppression, and black box voting, Trump will lose, and Biden will be elected. If that happens, will Trump leave peacefully? 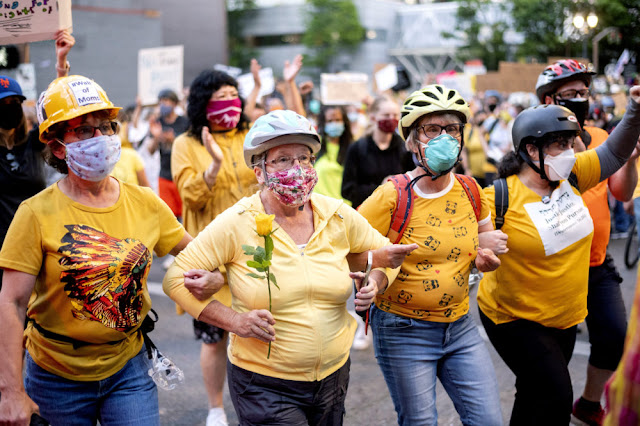 9. And if he doesn't, will other countries condemn the US? Will the UK, Canada, and other countries with a long and friendly history with the US punish and sanction it? What would it take?

10. In my heart, hope wrestles with cynicism.

For so long, I have felt the situation in the US is beyond hope. Then Occupy. Then Black Lives Matter. Then the Fight for 15. Then Idle No More. Then Extinction Rebellion. People organizing. Against racism. Against a brutal economic system. Against environmental destruction. People organizing knowing that these are all connected. I feel a tiny glimmer of hope.

Then I see the uprisings, and I have hope.

Then I think... and I despair.

(Of course, how I feel is irrelevant.)

11. The future is unknown. No one knows what the future will be, no matter how much certainty they put in their words or their voice.

The future has not been written yet. If Trump is having this much trouble squashing resistance in Portland, what's it going to look like in Brooklyn, or Philadelphia, or Oakland, or St. Louis?

This is why it's so important to organize. And that's exactly what BLM and FF15 and all the solidarity networks have been doing.

Who knows, maybe after organizing and winning small victories, changing R to D won't be enough. Maybe people will demand more.
Posted by laura k at 7/27/2020 07:04:00 AM