what i'm reading: syria's secret library: reading and redemption in a town under siege 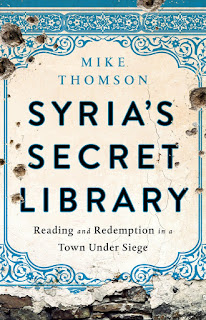 Syria's Secret Library: Reading and Redemption in a Town Under Siege is a tribute to the power of books to heal, to offer refuge, and to nourish communities. It's also a tribute to the spirit of resistance to tyranny and oppression.

In 2013, the Syrian town of Daraya was targeted by the country's dictator, Bashar al-Assad. Many residents managed to evacuate, but others stayed, determined to hold the historic and then-thriving town as a stronghold against the Assad regime.

There, as their town was bombed and burned, a group of young men built an unlikely refuge: a library.

The story of how these young Syrians salvaged and rescued books, often placing themselves in great danger to do so, is remarkable -- but even more remarkable is the community they built. Every book was catalogued, dated, and signed out when borrowed. The origin of every book was noted, so that its owners might reclaim it in happier times. There were book clubs and lectures. Some rebel fighters took books to the front lines and started a book club there! The library became a community centre, an oasis, a refuge, and a stronghold of resistance.

In library school, I had occasion to read about reading -- why we read, how we feel about reading. (I've blogged about a wonderful book on this topic: Reading Matters: What the Research Reveals about Reading, Libraries and Community by Catherine Sheldrick Ross, Lynne McKechnie and Paulette M. Rothbauer.) I thought of this as members of the Daraya library community described what the library meant to them. They ticked every box: gaining knowledge of the world, gaining self-knowledge, building empathy, an escape from present-day worries, a search for strategies and solutions to present problems, a connection with something larger than oneself. As the author puts it:

This was a library for everybody. On its polished shelves were books on just about every topic you could think of, each one either an education, an escape or entertainment for the reader, and often all three.

The library team were mostly former students whose educations had been cut short by the civil war. They wanted to keep their minds sharp, and they wanted to learn how to best serve and rebuild their community when the war ended. They came from all backgrounds, and had been enrolled in a wide range of study, from poetry to physics to economics. They set up a system of self-government; they protected books, and they protected each other. Their efforts are one of the most inspirational stories you will ever read.

Of special note is young Amjad, the teenaged self-appointed Chief Librarian. Librarians will recognize not only Amjad's passion for his work, but his spot-on instincts. For example, he made sure to sit where everyone could see him, and to let everyone know he was available to answer questions and find books.

Members of the library team told the author:

We believed that a place like this could store part of our heritage as well as the keys to our future. It would not only help us to continue our education but be there for anyone who loved reading. We also hoped to use the books we gathered to create a curriculum for local youths. This way they would have some sort of guidance, like we had at university, rather than just randomly reading any book they came across. In short, we wanted the library to become a minaret for Daraya.

This minaret was built and guarded not far from the site of the oldest known library of the ancient world: a collection of clay tablets, complete with tags that are believed to be a cataloguing system, uncovered by archaeologists in the 1970s.

Classes were being held there, on everything from English, Maths and world history, to debates on literature and religion. These were usually followed by lively discussions. One of the most memorable and popular talks was on how the Japanese city of Hiroshima had been rebuilt after it was devastated by an atomic bomb in the Second World War. Another lecture which fired people's imaginations was on the London Blitz during the same conflict and how the city and survived near endless bombardments.

The people creating the library are very clear that their work is part of the revolution, and part of their own salvation in these darkest of times.

We believe that building this library is very important, not just for our minds but also for our souls. We are convinced that knowledge rarely comes when you sit doing nothing. It usually follows hard work and sometimes taking great risks. . . .

Among the books we value most are those which describe how people in other countries have dealt with traumas like ours. We hope that by reading these we can learn the best ways of rebuilding our nation when the fighting has stopped. They give us hope in dark says like these.

Syria's Secret Library paints a grimly honest picture of the truth behind the cliche "war-torn region". One heartbreaking detail that stays with me is a teacher cutting out images of food from the books she was using, so her students -- for whom hunger was a constant condition -- wouldn't have to see them.

Mike Thomson, author of Syria's Secret Library, is a reporter who has covered Syria and many other war zones for the BBC. This project, which began as a radio documentary, is an incredible feat of journalism, given how Thomson was forced to conduct his interviews by text, Skype, WhatsApp, and other electronic means. Thomson's subjects had only intermittent access to the internet or mobile networks, and they were under constant threat by bombs and snipers. Their town was blockaded, their crops bombed, burned, and watched by snipers, so they had almost no access to either food or fuel.

The author frequently felt guilty about enjoying his privileged life in the UK while his subjects, who had become his friends, were suffering. Thomson, who clearly felt it was his mission to tell the world about this horror, was shocked and disgusted that some of his peers remarked that the suffering Syrians "don't know any better" or "must be used to it by now". These comments illustrate such a lack of empathy, such othering! Do people "get used to" starvation, to being bombed? They may lose hope, or they may struggle on in nearly impossible conditions, but I can't imagine anyone truly gets used to it.

I have only two minor quibbles with this book. One, I wish the subtitle had been "Reading and Resistance" rather than "Redemption". It would be a much more accurate reflection of the story -- so much so that I wonder if the publishers felt "resistance" was a loaded word.

My other complaint is the author's occasional musing on why the United States did not intervene in Syria's civil war. Thomson notes that "the previous president" (i.e., Obama) talked a lot about the situation but did nothing, and he quotes one of his subjects praising Trump for bombing Syria. Surely Thomson knows that US interventions have caused more destruction, dislocation, trauma, and starvation than they have ever repaired. Surely he knows, too, that the US did very little to help the millions of refugees created by this civil war -- and has demonized and tormented refugees from other areas. I can understand Thomson's frustration, but looking to the United States as a potential saviour strikes me as bizarre. As I said, these are minor niggles, as the book is largely apolitical.

Syria's Secret Library is a moving, inspiring story about the human hunger for knowledge and community, and the will to resist and endure, even under the most difficult circumstances.
Posted by laura k at 12/28/2019 03:01:00 PM