Long ago (in internet terms), in the early days of what we then called the Blogosphere, one of the primary functions of blogs was to share other posts and articles of interest that we came across online. Social media has taken over that function -- and much less effectively. How many people actually read links they find on Twitter? While a meme or a short video may go viral, a lengthy think-piece becomes just another passing link in the endless feed.

I stopped using this blog to share articles of interest, but sometimes I come upon something that I just can't let go. Then I need to send them out into the world again through wmtc. I have a couple of those right now. Here's the first one. 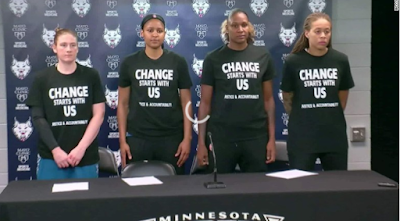 Maya Moore, currently one of the best professional basketball players on the planet, stunned the WNBA and its fans when she announced she would not play in the 2019 season.

Her reasons are even more surprising: Moore left the game to focus on social justice. Specifically, justice for one man, wrongly convicted and serving prison time in the state of Missouri, and more generally, for a more just justice system. Moore believes this is her purpose in life, deeply connected to her faith.

Last summer, Moore's team, the Minnesota Lynx, took the court wearing t-shirts declaring "Change Starts with Us. Justice & Accountability" on the front and "Black Lives Matter" on the back, along with the names [Philando] Castile and [Alton] Sterling, two of the many African Americans killed by police. The t-shirt also displayed the Dallas, Texas Police shield, a reference to the five police officers killed by a sniper in 2016, one man's protest against police violence.

Moore became interested in the case of Jonathan Irons, currently serving 50 years for a crime he was convicted of in 1998, at the age of 16. She was so moved by the injustice of Irons' case that she decided to focus full-time on criminal-justice reform.

There's also another thread to this story. The WNBA has a salary cap of $120,000. By contrast, the minimum salary in the NBA is $98.226 million. Some fans laud female players for being less "greedy," but $120,000 may like a comfortable salary. But athletes' careers are very short and can be cut even shorter by injury. To maximize earning potential to help secure their futures, female players will also play in European and Asian leagues, essentially playing all year round with very few breaks.

When Moore stunned the basketball world with her announcement in the Players' Tribune website, she left her reasons vague. Then she sat down with sportswriter Kurt Streeter and told her story.

To read more about Moore's decision and Irons' case, see this story from June of this year, in the New York Times: Maya Moore Left Basketball. A Prisoner Needed Her Help.
Posted by laura k at 12/01/2019 06:11:00 AM