the north island report: what is going on with the price of gas? 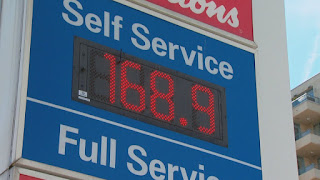 I normally don't complain about prices, and I dislike when other people with privilege do so. But for every rule, there's at least one exception, and this is it. What the hell is going on with the price of gas??

Gas is always expensive in our area, often a good $0.10 more per litre than in Nanaimo or Victoria.

When we left Ontario, gas prices were fluctuating between around $1.15 and $1.25. The highest price I ever saw in southern Ontario was $1.35.

Driving from the GTA to the Island, we were amazed to see less than $1.00/litre in Manitoba.

This story -- Gas prices break records in B.C. for second weekend in a row" -- shows a Vancouver station at 1.72.

People in areas with good transit options, and people with the ability to bike to work, often blame drivers for their dependency on fossil fuel. But not depending on fossil fuel is a privilege. Most people have no choice. In order to work and to live, they must drive. I drive less than five minutes to work, and Allan works from home. But our library customers and co-workers, who work mostly part-time and often in casual arrangements, are spending half a paycheque or more just getting to work and getting home again. People who already spend half their paycheque on rent!

I don't believe this is the result of federal or provincial carbon taxes. Those taxes account for a few cents per litre, not $0.30 per. Even so, this demonstrates the idiocy and injustice of expecting individual consumers to solve climate change. While governments continue to fund planet-killing industries, instead of investing in local economies and requiring corporations to do the same, and requiring them to pay their fair share of taxes, working-class and middle-class people get squeezed.

People need to drive to survive. They don't have the privilege of "making better choices".

BC Premier John Horgan says that the government will monitor prices over the summer, and will consider providing some relief. Not enough. People are hurting. They need help.
Posted by laura k at 4/23/2019 07:02:00 AM