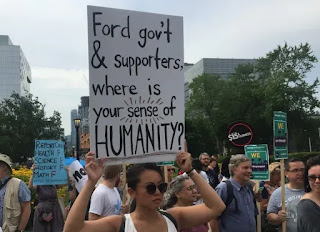 The chickens have voted for Colonel Sanders again. It's an old, old story, and we seem farther away than ever from changing the ending.

Doug Ford is destroying Ontario in a way Mike Harris only dreamed of. Healthcare, schools, libraries, parks, public transit -- all programs, all supports, and countless jobs are under the ax.

Jason Kenney will expand the petrostate and destroy whatever gains have been made in renewable resource development, when he's not busy destroying public education and healthcare.

Both men are skillful, deceitful manipulators. Neither are to be trusted.

Yet hundreds of thousands voted for them.

And while it's true that an NDP government will never be as good as advertised, there is a clear distinction between what's on offer from both parties. And more people chose right-wing over left-leaning.

And yes, Alberta has been restored to its more typical conservative government, but last time out, these same voters chose the NDP. And Ontario? Don't say it. Do not utter the words B__ R__.  If that's all you've got -- if the reason Ontario voters chose a sexist, racist, homophobic, xenophobic, anti-intellectual, anti-democratic, anti-education, anti-transit, anti-public healthcare, liar is because an NDP government supposedly made a mess of things almost 25 years ago -- then there is truly no hope for the future.

And yes, first-past-the-post voting produces skewed results. But it's not winner-take-all of the entire province. The majority of voters in the majority of ridings chose lies, corruption, and fear-mongering over the hope of a brighter future.

How does this happen??

Once upon a time, Canada stared down the profit-making medical establishment and instituted healthcare for all. Canada broke with the US on foreign invasions, choosing to fund art, film, and sport rather than a bloated military. Canada crafted a Charter of Rights and Freedoms that was the most inclusive in the world. This country has made those choices. I know the deficiencies. I know the gaps between ideals and reality (and the giant "except" that is our Indigenous neighbours), but still, the reality was a lot healthier than it is now. Now Canada marches in step with the corporatocracy. Canadians to do so.

The US electoral system is corrupt to its core -- both first-past-the-post by entire state and controlled by the parties themselves. What's Canada's excuse?

How do we prevent this from happening?

Electoral reform is a must -- and seems nearly impossible to achieve.

Ending lying campaign advertising and smear campaigns would go a long way -- but how would we achieve that?

More education at every level of society is needed. Corporate governments and the media that enable them ensure there is less of that than ever.

At the same time my comrades are talking and exhorting about fighting back. Protest is crucial. I'll not say otherwise. But to a large extent, it is also futile. Under the parliamentary system, a majority government -- one without morals, one that doesn't give a fuck about democracy -- is immune to protest.

I keep reading and seeing, "We will mount a huge fightback!" and "We can beat Ford!". And I feel myself saying, "Really? How?" We can and should vent our anger and frustration, we should be in the streets, we should be organizing school strikes and general strikes and calling for their heads. The most severe cutbacks may be pulled back, less extreme. But will that "beat Ford"?

I hate giving in to my cynicism. Cynicism is the enemy of activism, and an enabler of the ruling class. I just can't find it in me to be optimistic about the future right now.
Posted by laura k at 4/20/2019 09:27:00 AM