what i'm reading: born to run by bruce springsteen 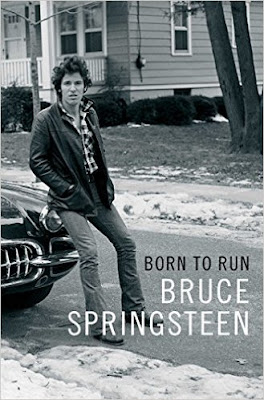 This is a run-don't-walk review. Fans of Bruce Springsteen: run to find a copy of The Boss' memoirs, Born to Run. This book was seven years in the making, and (like Chrissie Hynde's and Patti Smith's memoirs) written by the artist himself. It is by turns hilarious and heart-wrenching, poignant and gripping, and always profoundly insightful and a joy to read.

Springsteen is an intellectual -- a man of great intelligence who, for better and worse, lives in his own head, analyzing and at times over-analyzing the world around him and his own reactions to it. Because of this, he brings a powerful self-awareness to his life story -- an ability to articulate where his art comes from, and how his personal pitfalls have affected the most important relationships in his life.

Born to Run is also noteworthy for what it is not. It's not a tell-all or an exposé; readers looking for dirt will be disappointed. Springsteen protects his closest friends from exposure, and when it comes to blame, usually points the finger only at the man in the mirror. If there are personal disagreements, they remain personal: Steve and I had some issues to work out, so we sat down and had an honest talk, and moved past them is a typical approach. Even about his first manager Mike Appel, whose one-sided contracts hobbled Springsteen for years, and whose idol was the infamous "Colonel" Tom Parker, controller of Elvis Presley, Springsteen is measured, compassionate, and forgiving, professing a deep affection for him. The story is honest and revealing -- what was in those contracts, why Springsteen signed them -- but there is no anger or blame.

Born to Run is also not a memoir of a fast life through the great trinity of sex, drugs, and rock and roll. Springsteen was 22 years old when he had his first drink of alcohol, and has never used recreational drugs. He mentions the rocker's on-the-road sex life, but only obliquely, to let the reader know it existed, and was then outgrown. That leaves rock and roll, and plenty of it.

In the musicians' memoirs that I've read, the most exciting writing has been their recollection of their moment of discovery. Keith Richards, Patti Smith, and Chrissie Hynde were all able to articulate how music -- literally -- changed their lives, how the discovery of a certain music at a certain time altered their chosen path forever. Springsteen can also pinpoint those moments, and his great self-insight and writing talents make it fairly leap from the page into the reader's heart.

Springsteen's writing style itself is deeply evocative. Sometimes his writing takes off on a flight of fancy.

Conditions were generally horrific, but compared to what?! The dumpiest motel on the road was a step up from my home digs. I was twenty-three and I was making a living playing music! Friends, there's a reason they don't call it "working," it's called PLAYING! I've left enough sweat on stages around the world to fill at least one of the seven seas; I've driven myself and my band to the limit and over the edge for more than forty years. We continue to do so, but it's still "playing". It's a life-giving, joyful, sweat-drenched, muscle-aching, voice-blowing, mind-clearing, exhausting, soul-invigorating, cathartic pleasure and privilege every night. You can sing about your misery, the world's misery, your most devastating experiences, but there is something in the gathering of souls that blows the blues away.

Other times, there's a sparkling turn of phrase: "He had the shortest highway between his fingers and his heart I'd ever heard". Or a metaphor that brings the truth home.

We'd navigated the treacherous part of the river, the part Mike and I couldn't make, where the current changes and the landscape will never be the same. So, breaking into the open I looked behind me in our boat and I still had my Clark. Up front, he still had Lewis. We still had our own musical country to chart, many miles of frontier to travel, and music to make.

I have been a diehard Bruce Springsteen fan since my teenage years, one of the millions who grew up in the New York/New Jersey/Philadelphia area who feel a special kinship with Springsteen and a special ownership of his music. I've been amazed and thrilled that his music has matured along with his fans. Despite this, or perhaps because of it, I wondered if the latter half of Born to Run might be a let-down. The story of how a working-class New Jersey boy discovered his talents and navigated the treacherous waters to rise to fame -- that's a gripping tale. But how that now-famous musician lives the rest of his life -- is that going to be interesting, too?

Yes. Emphatically yes. In the second half of Born to Run, Springsteen explores his ongoing relationship with his parents, his struggles to free himself from the patterns of his father, and the struggles, challenges, and joys of learning how to parent. The E Street Band broke up, then reformed, and two of the original members died. There's a long, restorative motorcycle journey through the American desert, and a cross-country road trip of self-discovery. There are fascinating details about Springsteen's writing process. There is poetry in all of it.

Throughout, Springsteen is honest about his struggles with anxiety and depression. He relates the roots of his own issues to those of his father's, whose mental illness, like so many from his generation, was undiagnosed and untreated. Interestingly, Springsteen never says "mental health" or "mental illness" -- simply illness. I thought that was a very interesting and positive choice -- making no distinction between mind and body. Springsteen writes about how he found relief, from both talk therapy and medication, pulling no punches: these drugs saved his life.

Fans may also be interested in the companion CD, Chapter and Verse, which chronicles the music written about in the book, and includes five previously unreleased songs.

I'll close this already-long review with a telling passage that speaks to the style and depth of Born to Run.

I learned many a rough lesson from my father. The rigidity and blue-collar narcissism of "manhood" 1950’s style. An inner yearning for isolation, for the world on your terms or not at all. A deep attraction to silence, secrets and secretiveness. The distorted idea that the beautiful things in your life, the love you struggled so hard to win, will turn and possess you, robbing you of your imagined hard-fought-for freedoms. The hard blues of constant disaffection. The rituals of the barroom. A misogyny grown from the fear of all the dangerous, beautiful, strong women in our lives, crossed with the carrying of an underlying physical threat, a psychological bullying that is meant to frighten and communicate that the dark thing inside you is barely contained. You use it to intimidate those you love. And of course . . . the disappearing act; you’re there but not there, not really present; inaccessibility, its pleasures and its discontents. All leading ultimately to the black seductive fantasy of a wreck of a life, the maddening boil lanced, the masks dropped and the long endless free fall into the chasm that at certain moments can smell so sweet from a distance. Of course, once you stop romanticizing it, more likely you're just another chaos-sowing schmuck on the block, sacrificing your treasured family's trust to your "issues." You're a dime a dozen in every burb across America. I can't lay it all at my pop's feet; plenty of it is my own weakness and inability at this late date to put it all away, my favorite harpies, the ones I count on to return to flit and nibble around the edges of my beautiful reward. Through hard work and Patti's great love I have overcome much of this, though not all of it. I have days when my boundaries wobble, my darkness and the blues seem to beckon and I seek to medicate myself in whatever way I can. But on my best days, I can freely enjoy the slow passing of time, the tenderness that is my life; I can feel the love I'm a part of surrounding me and flowing through me; I am near home and I am standing hand in hand with those I love, past and present, in the sun, on the outskirts of something that feels, almost . . . like being free.