what i'm reading: reckless: my life as a pretender by chrissie hynde 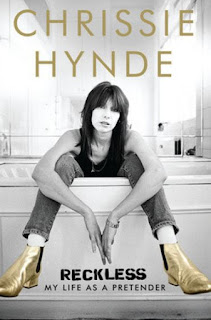 I'm a big fan of The Pretenders, but more than that, I'm a Chrissie Hynde fan. To me, she has always been the epitome of the female rock frontman. She's the whole package - guitar player, singer, songwriter, commanding stage presence, pure rock image, and smoldering, tough-girl beauty. I was naturally interested reading her memoirs, even more so when I learned she wrote the book herself, without a professional writer.

Reckless: My Life as a Pretender is aptly titled. Hynde's story is one of rash decisions, massive drinking and drug use, and a sizeable amount of danger. It's also a story of following your heart more than your head (often disregarding your head altogether), about loving music and the rock ethic so intensely, that only that life will do.

Hynde was ready and willing to live a nomadic, stripped-down life, without regard to commercial success, and often without material comfort at all, because comfort and success and everything that goes with it didn't matter. Only music and the rock life - and the true connections that she felt through those - mattered.

So while this review in The New York Times reads Reckless as a cautionary tale, I do not. To me it is simply an honest account without judgment. There's no doubt that Hynde's choices sometimes led to pain and suffering, but there's also no doubt they led her to her most authentic and fulfilled life. She's clearly not advocating a life of drug use and reckless decisions. She's just telling us that's what she did, for better or worse.

The book's subtitle - My Life as a Pretender - is apt, too, as Hynde often saw herself as an impostor, and maybe still does to some extent. Throughout the book, she is self-deprecating about her own talents. It isn't false modesty. It's an honest self-appraisal from someone who has lived "on nerves and feelings" (as someone Hynde and I mutually adore once wrote) and can't quite understand how her crazy life led her, at least sometimes, to success.

In Reckless, Hynde spends a long time recounting her young years, growing up in Akron, Ohio - her constant sense of alienation, her electric discovery of her musical soul, the scary and dangerous and occasionally fun situations she found herself in. Her pilgrimage to Europe - first London, then Paris, then, after a disastrous attempt to live in the US again, settling in to live in London permanently - is also documented in quite a bit of detail.

Two-thirds of the way through the book, The Pretenders still have not formed. The formation of the band, their early writing and recording, and the deaths of two members of the original lineup, all happen very quickly at the end of the book. I was left with a lot of questions.

The writing itself is very uneven, veering from moving and lyrical, and often humourous, to clunky and ridiculous. The book is sometimes extremely raw and revealing, and sometimes hazy and guarded. Some particularly rough times that Hynde survived - the subject of many book reviews - are recounted only cryptically.

Overall, though, it's a fascinating read. If you've ever fantasized about the rock-and-roll life - ever wondered how a misfit girl from the American midwest ends up leading a bunch of British men in an iconic rock band - and especially if, like me, you love Chrissie Hynde - this book is very entertaining.
Posted by laura k at 4/07/2016 07:30:00 AM