precariously yours: notes from the 2016 cupe ontario library workers conference

Last week I attended the CUPE Ontario Library Workers Conference, my second year, and my first since being elected to the organizing committee. This year's theme was precarious work, and nothing could be more relevant to library work today.

All three keynote speakers were excellent, with engaging, eye-opening presentations that brought our picture into sharp and disturbing focus.

Count it and name it, so we can change it

Wayne Lewchuk, professor of economics and labour relations at McMaster University, is the go-to guy for research into precarious work. Michelynn Lafleche is the Director of Research, Public Policy and Evaluation at United Way Toronto. (United Way is the primary social-service provider in this region.) They developed PEPSO: Poverty and Employment Precarity in Southern Ontario. Its purpose: quantify the anecdotes, demonstrate what precarious work is and the affects it has on individuals, families, and communities, and offer practical solutions to this crisis.

PEPSO has produced two major reports, It's More than Poverty in 2013 and The Precarity Penalty in 2015. As Lafleche writes:

...we (as a society) got here one decision at a time. So the good news is that vulnerability and insecurity are not inevitable: we can escape this growing trend, decision by decision. It will take time, it will take clear ideas on what to do, and it will take a widespread coalition to make the necessary policy and social change, but it is not impossible. Our task, now, is to make this change happen.

What is precarity and how does it affect us? 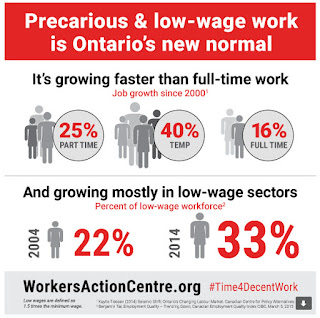 Wayne Lewchuk must be an absolutely awesome professor, because I've never seen someone turn statistical data into such an engaging presentation.

Precarity is more than poverty. Although precarity can certainly lead to poverty, its effects are felt throughout the middle class, too. To quantify and document precarious work, Dr. Lewchuk and his researchers developed the Precarity Index, a multi-layered tool that was rigorous, far-reaching, and extremely revealing. Here are some highlights from their work.

In this context, precarious work means some combination of:
The research found:
Precarious work has many insidious and inter-related effects. Precarious workers...
Children in a family where one income-earner has precarity... 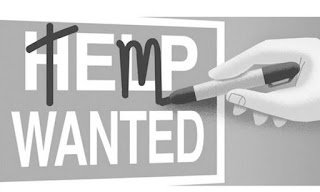 And, no surprise, rates of precarity are higher when factoring in race, gender, and country of origin. Precarious workers also face higher rates of discrimination: when you have five, eight, ten different employers over the years, there are many more opportunities for discrimination. And of course, precarious workers are very unlikely to stand up for their rights in the workplace, for obvious reasons. (Very convenient for employers!)
You can read and watch fascinating - and depressing, and enraging - case studies from the PEPSO research here.
What can we do about precarity?
After Dr. Lewchuk's important but depressing statistics, Michelynn Lafleche's presentation was a much-needed boost. PEPSO has 28 specific recommendations that, together, would end this crisis of under-employment.

The first is so obvious and so overdue, I can barely believe it hasn't happened yet: reform the Employment Standards Act! The ESA, which governs the rules of the workplace in Ontario, was last reformed in 2000. The conditions of employment have changed drastically since then, and fewer and fewer workers are protected by the ESA.

Modernizing the ESA must go hand-in-hand with reforming Employment Insurance. What good is EI if the only people eligible for it are those with permanent, full-time jobs? Temp workers, contract workers, and all manner of precarious workers are not eligible for EI! This is a disgrace and must be rectified.

Other recommendations were less obvious but equally urgent. Government-paid training embedded into the system. A system for benefits for workers in precarious employment. Improved regulation of temp agencies.

You can read about other proposed solutions here, from the Toronto Workers' Action Centre, and here, from Unifor.

It wasn't always like this! How did this happen?

Kaylie Tiessen, formerly of Canadian Centre for Policy Alternatives, now with Unifor, addressed the same topic from a slightly different - and equally enlightening - angle. It's no wonder I enjoyed her presentation so much. It was about an issue that I'm always going on about, and see very little mention of in the media.

Over the last 30 years, we have seen the erosion of both the labour market and public services. What caused that? Short answers: tax cuts (especially to corporations), trade agreements, corporate greed, and the failure of governments to act on our behalf.

The economy used to be shaped something like a pyramid: low-paying jobs on the foundation, higher-paying employment but fewer positions as you go up each level of the pyramid. At the top are the highest-paid people, but not so many of them.


In theory, with education and hard work, one could move up the pyramid, at least from the bottom to the middle, and sometimes from the middle to the top. (How well that theory worked, and what social supports were needed to make it work, such as affordable education, is another story.)

Now the economy is shaped something like an hour-glass. The middle has been squeezed to a choking point. Most of the people who were formerly middle class have been squeezed downward, producing something new in modern times: a huge trend of downward mobility. And more than ever, people employed in (what used to be) entry-level jobs remain in entry-level jobs, no matter what their skills, education, or work ethic. 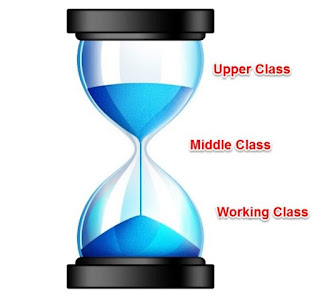 Where have all the good jobs gone?

Ontario has lost 400,000 manufacturing jobs in the past 15 years. (This happened much earlier in the US. In this case, Canada being behind the US was a good thing. But it didn't last.) Corporations found it more profitable to move their operations to countries without environmental protections and labour laws, and our governments - instead of protecting our jobs and our communities - made it easy for them to do so, entering into "fair trade" agreements with no democratic oversight. (That's what the "G8" or "G20" is, by the way: elites from around the globe making deals that benefit the few and disadvantage the many.)

Some employment sectors have seen growth. That's good news, right? Let's take a look. One area of growth is in the healthcare field. Does this mean more doctors, more nurses? More service and more good jobs for Ontarians?

The answer is no. The new openings are not for well-paid doctors and nurses. They are, for example, personal support workers. Tiessen described the working conditions of a typical PSW.

The night before she sees clients, she must call each client to arrange and confirm appointments. She is not paid for that time.

She must drive from client to client, over a distance of many kilometres throughout her region. She is not paid for that time. She receives no reimbursement for the use of her car or for gas.

She is paid only for the time spent with clients.

And her client list varies from week to week, so she never knows how much she'll earn. Some weeks she has no work at all. That right there is precarious work.

Next time you hear about "jobs being added," ask yourself, What kind of jobs?

Why is this happening?

Supply-side economists claim that corporate tax cuts lead to job creation. Yet it has been proven - time and time and time again - that this does not happen. Corporate savings are "warehoused". The tax savings go into private pockets and are never returned to the economy.

Living Wage Canada has created a Living Wage Index, showing what a living wage would mean in different communities across Canada. In Toronto, the living wage is $18.52/hour. Peel is still being calculated, but it can't be that much less. The minimum wage in Ontario is $11.25. Many people in Ontario are working and using food banks to survive. That should be unthinkable, but it is rapidly becoming the norm.

Obviously the minimum wage has not kept pace with the cost of living. That didn't begin last year or even in the last decade. The last year that a minimum wage job could lift a person over the poverty line? 1976.

At the end of her talk, Tiessen revealed that until very recently, she was one of the many "millennials" - people now in their 20s and early 30s - living with precarity. Now, at 34 years old, for the first time, she has full-time employment. She noted that when she did her taxes this year, for the first time ever, she had only one T4 slip.