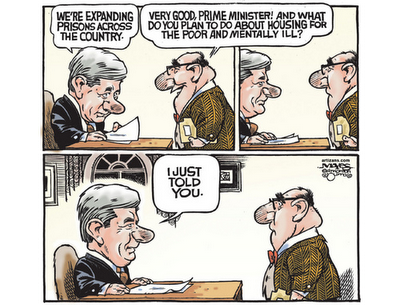 We know that Stephen Harper thinks the United States is the GNOTFOTE, but of all the things to emulate about the US, the prison-industrial complex is a particularly poor choice.* When conservatives in Texas tell you a prison strategy doesn't work, take their word for it: it doesn't work!

Adds Representative Jerry Madden, a conservative Republican who heads the Texas House Committee on Corrections, "It's a very expensive thing to build new prisons and, if you build 'em, I guarantee you they will come. They'll be filled, OK? Because people will send them there.

"But, if you don't build 'em, they will come up with very creative things to do that keep the community safe and yet still do the incarceration necessary."

These comments are in line with a coalition of experts in Washington, D.C., who attacked the Harper government's omnibus crime package, Bill C-10, in a statement Monday.

"If passed, C-10 will take Canadian justice policies 180 degrees in the wrong direction, and Canadian citizens will bear the costs."

But really, Harper doesn't care if a strategy doesn't work. He's already demonstrated that he doesn't care about facts. The demise of the mandatory long-form census is proof of that. With crime rates in Canada steadily falling, statistics can only get in the way of ideology.

Look, Bill C-10 would raise the cost of filing for pardons from $150 to $600. So it's not that the government is against pardons. It's against pardons for poor and working-class people. If you have the do-re-mi, by all means, feel free to use the justice system.

Want to make crime rates even lower? Adequately tax corporations and the super-rich, and re-invest the revenue in education, jobs and social support programs. That's what works.

Want to appear tough on crime while extending the authoritarian power of the state, and make a bunch of poor people disappear? Bill C-10 will take care of that.

For more information and to sign a petition opposing the crime bill, go to LeadNow.ca's "Keep Canada Safe" page.