tomorrow in toronto: demand a toronto for everyone 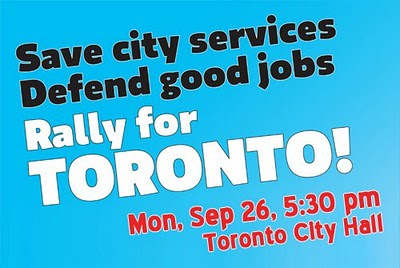 Toronto Mayor Rob Ford has been forced to back away from some of his more egregious - and completely unnecessary - threatened budget cuts, claiming that library branches will not be closed. But let's not forget, in his mayoral campaign, Ford said he'd make no service cuts at all. So why should we believe him now? What's more, Ford has only backed down on cuts to the Toronto Public Library because of public outcry. Meaning: protest works.

If you can be in the GTA tomorrow, join a mass protest to defend public services and good jobs in our communities, outside the City Council meeting where the budget will be decided.

Even if you (like me) don't live in the City of Toronto, this should matter to you. If the mayor of Canada's largest city gets away with mass privatization and service cuts, it will be open season on public services in every city in the country.

More information on Facebook: Rally for Respect: Demand a Toronto for Everyone.