green tomatoes, red socks, and a white dog, plus libraries of many hues

For those of you following...

First, and most importantly, Tala. She is doing really well! After our last trip to Guelph, we added on a second medication, one designed to specifically target nerve pain. We had to give that several weeks to kick in, with Tala confined to her pen except to relieve herself.

After a few weeks, we increased her activity a tiny bit - and the pain and lameness returned almost immediately. I was very discouraged, but the vet said we were on the low end of the dosages, and could safely increase. Et voila, that did the trick. With the increased medication, we've been able to step up Tala's on-leash walking time a tiny bit each week, and she's doing great. We're up to ten minutes, three times daily. 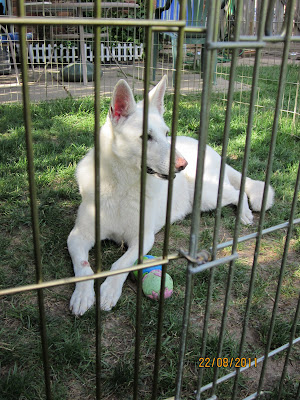 When I say she's doing well, of course that's in context of her overall condition. No off-leash play, no stairs, no squirrel-chasing. But given all that, this is a big improvement. She's in good spirits, except for those sad moments when Allan drives off with Diego to the dog park.

The gardenette. After harvesting almost 60 tomatoes from our two plants, we waited for the second tomato crop to ripen. And waited, and waited. It's autumn now in southern Ontario - the most beautiful time of year here - and the only thing turning red are the leaves. 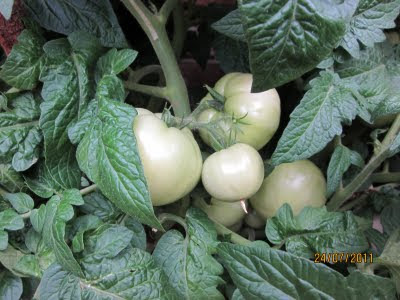 Three reasons I love Whole Foods: raw kale salad with sundried tomatoes, grape tomatoes, cranberries and pine nuts, spinach sauteed in garlic with almonds and pine nuts, carrot-parsnip pan-fried cakes. Sure, I could cook these myself, but: (a) I won't, (b) if I did, they wouldn't taste as good, and (c) I would never spend the time and effort involved to make such a variety of vegetable dishes. The great variety really helps me eat healthier. 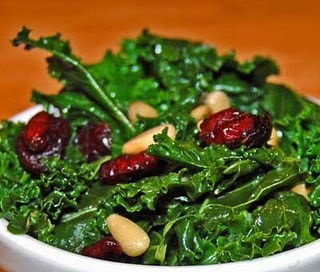 Trials of a student librarian. Both my courses this term aim for practical knowledge directly relevant to librarianship. There's theory involved, but only to the extent that it informs practice. This is great for me (and I won't be so lucky next term).

One course is a required: Introduction to Bibliographic Control, also known as cataloging, although it's broader than that. I expected this to be dry and boring, but for someone who's compulsively organized and loves to create systems, there's a definite appeal. Cataloging is apparently something people think is very easy and intuitive - until they try to do it themselves. That's when the complexities and challenges emerge. The assignments are designed for hands-on experience, which will be a nice change from research papers, essays or tests.

My other course is an elective: The Public Library in Culturally Diverse Communities. Although I confess I originally chose this class to make my schedule workable, it's obviously very relevant to my future work, especially since I have my sights on the Mississauga Library System. The professor is an expert in the field, and was a pioneer of multicultural library-service design in Canada.

What little winning the team has done has left fans elated; number of runs scored in September's five wins: 12, 14, 18, 4, 18. In between those crazy moments of happiness have been some terrible, dispiriting losses. Still, I remain convinced that the Red Sox will be in the playoffs, one way or the other.
Posted by laura k at 9/20/2011 11:00:00 AM