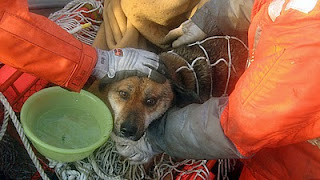 My heart goes out to the amazing Japanese rescue people who went to such lengths to save a dog's life.

The Japanese coast guard today rescued a dog washed out to sea with a house by the tsunami from the March 11 earthquake, Reuters reports.

A coast guard helicopter was investigating an island of debris off Kesennuma, in northern Japan, when the dog was spotted on a house roof. Frightened by the rotors, the animal disappeared inside, evading efforts to save him. A boat was sent after the helicopter ran low on fuel, and rescuers were able to catch the dog, who was described as "emaciated but alive."

The video won't embed, but you can watch it here, after 27 seconds of product pitch.