Before I started grad school in September 2009, I treated myself to a new backpack, one designed to carry and cushion a laptop. I got this "ePac" from Heys, which looks sharp and is full of compartments and all kinds of organizery fun. 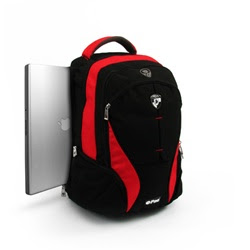 Less than two months after I started using it, the mesh slots on each side - usually used to carry an umbrella and a water bottle - developed holes. The backpack comes with a five-year warranty, which Heys customer service initially told me by e-mail would likely cover this issue.

When I went to the Heys offices, located nearby in Mississauga, the rude, dismissive people at the front desk told me to take a hike. This was considered "normal wear and tear" - which means, of course, that their warranty is a useless fraud. They said that mine was the first and only complaint they had ever received about this backpack. Who knows what I had been carrying in those compartments? They could not be responsible for those tears.

I persisted, writing a letter to attempt to bypass the surly front-desk staff. Heys offered me a coupon for 50% off my next purchase. So I can spend yet more money on their crappy products with their useless warranties. No thank you. (Something I might have included on our strengths list: tenacity.)

When I rejected their coupon, I also sent them all the Heys-related posts I had written, noting that if one Googles "heys customer service," these posts come up just after the company's website.

Eventually they called and told me I could pick up a new, replacement backpack at their office. Although I was pleased to have succeeded, I was disgusted at Heys' terrible customer service and the poor quality of their products.

[If you want to read my emails to them and their reply, the story in detail is here, here and here.]

Three weeks after I began using the replacement backpack, the mesh pockets tore again. Same holes in the same places. Now I suppose I had the only two Heys backpacks in existence to have this problem. What are the odds!

Over my winter break, I took the backpack to a shoe and bag repair person to see it could be repaired. I thought he might replace the mesh with a stronger fabric, but he said that wouldn't work. Instead, he sewed two strips of soft leather over the areas with the holes. It looks all right. It's actually barely noticeable if you're not looking for it. 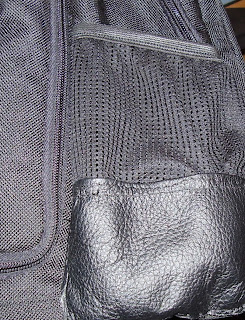 I was also pleased because now I know an old-fashioned shoe repair place in the area, something I hadn't found before. His tiny, narrow shop, stuffed with shoes and smelling of leather and polish, is exactly like the shop my mother used to frequent when I was a little girl. That man's name was Vinnie Buffalo; he always had classical music on a little radio, and he handed out lollipops. The Mississauga version brought back a nice memory.