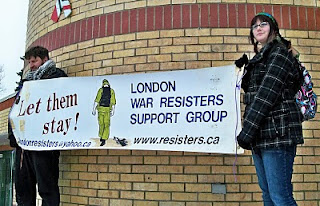 On Sunday, January 16, Michael Ignatieff came to London, Ontario, to skate with Liberal supporters in Victoria Park. An organizer tells me that most of the attention was on the mining accountability legislation, another Liberal private member's bill which died when their party leader and a few others failed to support it. Thus the chants:

"Hey Mike, what's the story, why're you acting like a Tory?"