airport sexual assault, cadets for christ and the bleating heart of the usa 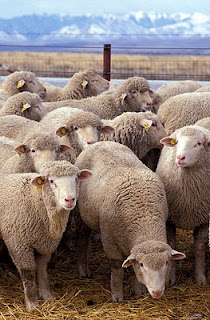 The only thing that scares me more than the fascist shift are all the sheeple who willingly march to the bleat.

In December, Claire Hirschkind, a 56-year-old rape survivor who has a type of pacemaker implant, was arrested and banned from an airport for refusing to submit to having her breasts handled by a stranger. Emphasis mine.

Hirschkind said because of the device in her body, she was led to a female TSA employee and three Austin police officers. She says she was told she was going to be patted down.

"I turned to the police officer and said, 'I have given no due cause to give up my constitutional rights. You can wand me,'" and they said, 'No, you have to do this,'" she said.

Hirschkind agreed to the pat down, but on one condition.

When Hirschkind refused, she says that "the police actually pushed me to the floor, (and) handcuffed me. I was crying by then. They drug me 25 yards across the floor in front of the whole security."

An ABIA spokesman says it is TSA policy that anyone activating a security alarm has two options. One is to opt out and not fly, and the other option is to subject themselves to an enhanced pat down. Hirschkind refused both and was arrested.

Other travelers KVUE talked to say they empathize with Hirschkind, but the law is the law.

"I understand her side of it, and their side as well, but it is for our protection so I have no problems with it," said Gwen Washington, who lives in Killeen.

"It's unfortunate that that happened and she didn't get to fly home, but it makes me feel a little safer," said Emily Protine.

Claire Hirschkind being sexually assaulted is "for our own protection" and "makes me feel a little safer". I keep reading and re-reading these words, marveling at how thoroughly brainwashed USians are, how perfectly their government has instilled fear in their hearts, how weak, compliant and complicit in their own oppression they have become.

Speaking of sheep, have you heard about this? A Christian cult called Cadets For Christ is operating within the United States Air Force. Cadets for Christ is part of the "shepherding" movement, which teaches that females are sheep, males are shepherds, and you do the math. Go read Ed Brayton, with links to the Military Religious Freedom Foundation and HuffPo.

I was a bit suspicious when I read the family name of the people who have gone public about their daughter's brainwashing: they are Peter and Jean Baas. But this has been documented for at least a year. It is not a hoax.

Labels: abuse of police power, civil liberties, fascist shift, how the us supports its troops, us regression