in which a bear learns i have ptsd 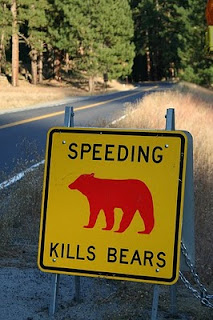 Yosemite National Park and the surrounding area are full of bears. Bears and people are an uneasy mix, at best. Many years ago when we were in Denali National Park, in Alaska, the Park's visitor education instilled in me a very healthy fear of bears. The ranger said, "Bears are mostly vegetarian. But the thing about bears is that they are highly intelligent, and every bear is unique, has its own personality. A bear who is mostly vegetarian could wake up one day and think, 'I have a taste for meat'. And you're meat."

Then there are the highly dangerous bears. Bears who have been injured and are in pain. Bears who have learned that human campsites are food sources. And, most dangerous of all, mother bears who believe their cubs are threatened.

In Denali, we learned about proper response to a nearby bear. You are to stand still, not run, because if you run, you will look like prey, and you will not be able to outrun this massive animal. You're supposed to stand your ground, make yourself look big by waving your arms around, and make a lot of noise. When you hike through a bear territory, you're always supposed to make noise. There we were in the quiet solitude of the tundra, talking loudly and jingling our "bear bells" to announce our presence! We felt silly, but in summer the cubs are out, and you do not want to surprise their mama!

In Yosemite, signs on all the roads remind you that Speeding Kills Bears. (I love the design of the sign.) As we entered the park, a sign told us that 27 bears were killed on the Yosemite roads in 2009. Given the pressures all wild animals are under, with habitat destruction and poaching, that bears should be killed by cars in a national park seems so awful to me. So the Park does heavy bear education, especially at the campsites and lodges.

We stayed in a "tent cabin" in the White Wolf area (more on this in the next post). Like all outdoor accommodations, the tent cabin came with a "bear box," which is a misnomer. It is an anti-bear box: a metal box with a complicated hook-and-eye and pin closure in which to store food.

The problem is that "food," to a bear, includes many things that humans do not consider food, such as soap, shampoo, toothpaste and water bottles, either empty or full. Storing food in the bear box, removing it only to eat, is no big deal. But having to store all your toiletries - unlocking the box, removing what you need, relocking the box, using what you need, then unlocking the box, returning the item, and relocking the box - with each open and close a difficult procedure - every time you need something - is very inconvenient. As much as we tried to think of everything at once and coordinate our bear-box activity, we ended up opening and closing the box with great frequency.

The closure on our box was warped, misshapen and rusty. The first time I opened it, I ripped the skin on one finger, sending blood running down my hand and arm. The first time Allan opened it, the exact same thing happened to him in the same spot on his hand. After that, I had the brilliant idea of using a washcloth as you would a glove. This spared our hands no end of abuse, but opening and closing this bear box was still a royal pain in the butt.

On Tuesday evening, our second night in Yosemite, we decided not to eat dinner at the lodge (again, more on that in the next post), to give ourselves more time out for the day, and also to use more of the food we had with us. We sat on folding chairs outside our tent cabin, using the tree stump table for our candle, wine and food. We were sitting about six feet away from our cabin door; the bear box was on the side of the cabin, about 15-20 feet away from us. Because we were so nearby, we had closed the bear box but not locked it.

We were eating and talking as the light faded and the dusk sky grew darker. We heard a noise - a clamoring of metal. I jumped up, grabbed the flashlight, and shined it towards the bear box. We both saw - or thought we saw? - a rounded shape, brown, in front of the box. I jumped back in alarm, and when I re-shined the light on the same place, the shape was gone.

Making plenty of noise, we walked over to the box. The door was wide open. The contents were undisturbed - but we had all the food at the stump table; only travel bags of toiletries were in the box. Maybe we hadn't seen the shape. Maybe the door to the bear box had swung open.

We calmed down finished our dinner. Deconstructing the incident, we decided the door to the bear box had swung open. Then, about an hour or so later, someone else staying at the site told us a bear had been seen in the camp "about 45 minutes earlier".

Let me tell you, I was afraid. My old PTSD hypervigilance kicked in. When Allan went to use the washroom, I lit two candles, held the flashlight and sang to myself to make noise. That night, I was really scared, despite knowing full well that a bear will not enter a food-free tent just to snack on humans. The PTSD was mild, nothing horrible. Mostly it was interesting to me to see that it could be triggered that way.

The next day, driving around, we realized there almost certainly had been a bear at the box. There was no wind, and the metal door of the box would not have swung open by itself. And we both saw the same shape. As there wasn't great food in the box, the little commotion we made must have scared it off.

To wmtc readers who go camping and are outdoorsy, I'm sure this story is commonplace, even silly. But to this non-camper, it was a little too exciting!
Posted by laura k at 8/07/2010 12:00:00 PM