community meetings: what we heard about the library 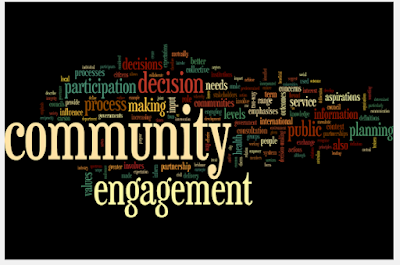 As I mentioned some weeks ago, our library system is in the midst of the strategic planning process, crafting a roadmap for the next five years. Part of the process is community engagement -- hearing directly from library users and local partners about the library's mission, its place in the community, and what kind of library services they want.

Through quirks of geography and staffing models, I ended up doing the most engagement sessions of any librarian in the system, as a team with one of my staff. We facilitated five public meetings, one in each of the communities we serve, plus we conducted one in-depth interview, and I co-facilitated a focus group on literacy.

All the materials were provided to us, and there was extensive training in the process. And thank dog for that, because even with all the support, it was a huge amount of work.

In these sessions, we presented a set of guided questions and activities, intended to elicit input on the library's values, mission, and direction.

In each community, between five and ten people spent an evening with us. This turnout seemed reasonable to us, given the size of our communities -- until we learned that even in much larger branches, participation was usually fewer than ten people. Seen as a percentage of population, participation was actually higher in our towns than in larger, more populous areas. This reflects what I already know: small communities love and cherish their libraries.

In the past few years, open hours and staffing has greatly expanded at two of the five branches that I manage. One was the result of a new branch for a tiny (population under 200), isolated community -- promised for many years, and finally delivered at the end of 2019. The other is in Port Hardy, the largest community I serve (2021 population approximately 4,000). That, I am proud to say, is the result of my advocacy. These changes have had a huge impact on the communities.

That leaves three other communities in our region still stuck with very limited staffing and open hours, and in two of those, also grossly inadequate physical space. I have a proposal for how to remedy this -- a simple and affordable plan, and a bargain in light of the impact it would have on these communities. I believe this will happen eventually; the question is how long communities will have to wait.

When it comes to providing service to rural and remote communities, the approach of most library systems is backwards. It's thought that these little towns don't need many open hours; after all, there aren't many people. But in remote communities, there is such a dearth of resources, so few options, that people depend heavily on the library -- more so than people do in populous areas where there are more options.

Thus, in our community engagement sessions, it was no surprise that the two things we heard the most was more hours and more space. Our staff works very hard, and partnerships with local agencies extend our reach, but despite heroic efforts, the towns are under-served.

This feedback was not at all surprising; it was what I expected. What I didn't expect was the outpouring of ideas.

The upcoming strategic plan will have four pillars: Reconciliation (relationships with Indigenous communities), accessibility, services to communities without a physical library, and increased access to technology and tech learning. Meeting participants were interested in all four, and offered a wealth of ideas.

And every idea was built on one idea: the library as community hub. On a list of phrases for a new mission statement, the phrases that resonated the most were the heart of the community, lifelong learning, knowledge sharing, and sparking curiosity and imagination.

Labels: becoming a librarian, life in a small town, things i heard at the library, vancouver island

Now that I live in a small town in an area far from even a smallish city like Springfield, MA, I am more and more away of the role that the town libraries play in the life of the community. It sure isn't only about borrowing books---there are cultural programs, programs for children, programs for seniors, book groups, computer access, etc., etc. I imagine that for your area, libraries play an even bigger role in the educational and cultural and social lives of the residents. Brava for the work you are doing!

Libraries do play a larger role in our towns. But in some cases, there is only untapped potential, because the library is so under-resourced.