the game report: an update that is not completely analog

Back in December of last year, I blogged about starting a game night at home, rotating every-other week between games and music. I was super happy about it.

Seven months later, I can report mixed results -- mostly mixed because my partner really doesn't like games. This has always been a source of frustration for me. For some reason (unknown to me) he decided to give it a try, but doing something you really don't like on a regular basis is not much fun.

It hasn't been a total washout. Plus... we've become addicted to a new-to-us videogame.

Not a gamer, but I love games

We don't have a gaming system and generally don't play videogames -- not because I'm opposed to them (or think they're evil, as some people seem to), but because I know I would find videogames incredibly addictive. I'd rather use my screen time watching movies or series. But there have been some exceptions.

Sometime in the early 2010s, we stumbled on Angry Birds on our Roku. We really enjoyed it and played the full game (with no power-ups) for three stars. Recently, I tried to get the newer Angry Birds Reloaded on our AppleTV. It wouldn't play properly, and apparently it never has on AppleTV, for anyone, ever.

But while trying to make that work, we stumbled on Badland. Now we're hooked. At least I am. Allan claims to be ambivalent, but he looks pretty hooked to me. 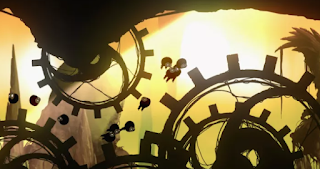 The internet tells me Badland is an adventure/platforming game. You guide a character (called a clone) through a series of challenges (called checkpoints). Each checkpoint requires different strategies and you have to figure out what they are. This is the kind of simple but challenging game I enjoy.

I love Badland's steampunk-style graphics and sound effects. It's very challenging and endlessly frustrating, which of course makes it very satisfying.

Although I am addicted to Badland, I don't want to play it alone. Allan and I play as a team, taking turns, or handing off the controller when a checkpoint gets too frustrating. Sometimes we'll watch a one-hour episode of a series, then play Badland for the rest of the evening.

Allan and I have three nights each week together, and I'm confining my videogame play to those. Althought this conflicts with my movement towards digital minimalism, I'm enjoying it too much to care.

Tabletop games: how we fared

Here are the games we played and the results - good, bad and mixed.

Thanks for the reviews, very helpful!

Amy, I'm sorry! I accidentally deleted your comment. I should know better than to try to put a comment through on my phone -- while I'm on the treadmill! Like it couldn't have waited.

I am also living with a non-game player. He only likes Monopoly and Clue, neither of which are much fun for two. Fortunately my younger daughter, my grandchildren, and my son-in-law love games, but the times we are together are limited. So mostly I play word games by myself---crosswords, Spelling Bee, Wordle, acrostics, and so on. I admit to being a traditionalist and am not a huge fan of games with so many rules and cards and pieces that I cannot absorb them without playing numerous times (something I don't ever get to do). My SIL tried to teach us all (including himself) some game in June that took him 40 minutes just to read the rules to us. In the end none of us had a clue how to play, including my SIL. So he said he would have to do research to figure it out. Why bother? There are so many games we all know that are challenging and enjoyable. :)

Amy, I don't think you're as much of a traditionalist as you think you are. I happen to know one of your favourite games is Ms Pacman. :)

There was definitely a learning curve on Ticket to Ride, and a steeper one for Pandemic, but we were able to make it through the game pretty well the first time, and the second time it moved along much faster. 40 minutes to read the rules? Not a chance!