what i'm reading: all my puny sorrows by miriam toews 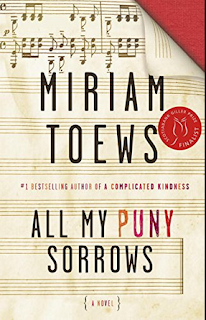 It's difficult for me to write about fiction. I don't like to describe plots, because for my own reading, I hate knowing plots in advance. I really enjoy letting the story unfold the way the writer intended. So I generally end up writing about themes -- which for many readers is not at all helpful.

All My Puny Sorrows is about family love, especially the bonds between sisters, between mothers and daughters, and among all the women. It's about suicide and depression, about loss and grief, and about surviving -- learning to live with the pain of loss -- and about finding joy and beauty all around us. It's full of irreverent, wry humour and is written with a light touch, a matter-of-fact voice.

It's a very moving book, and a very satisfying read. I recommend it highly.

Within the family story, Toews deftly weaves some commentary about the treatment of mental illness and society's views on suicide. The nurses in a hospital psych ward seem to think they can bully patients out of depression -- as if people suffering from major depression are really just sulking children. The hospital psychiatrist literally cannot be bothered to listen to patients' families. A friend shares some thoughts on suicide that are devoid of empathy -- views that are quite common.

Toews' writing is full of literary and musical references -- many poems and novels are referenced and quoted.

Toews (pronounced "taves") is one of Canada's best-known writers, the recipient of many Canadian writing awards, but I doubt she is well known beyond Canadian circles. (This is often true. Ask an American reader to name one Canadian author whose name is not Margaret Atwood.) Before All My Puny Sorrows, I had only read Toews' breakthrough novel, A Complicated Kindness, published in 2004. Both books have strongly autobiographical elements -- Winnipeg, Mennonites, religious repression and hypocrisy, and in this case, a family history of depression and suicide.

There's a very good profile of her from The New Yorker: "A Beloved Canadian Novelist Reckons with Her Mennonite Past: How Miriam Toews Left the Church and Freed Her Voice".

When I looked for A Complicated Kindness on wmtc, I discovered that my "what i'm reading" posts were once little more than a list and a short blurb. I wrote about the book here and here (posts from 2007), but neither post is an actual review. Neither is much of a post, for that matter.

This post from 2006 quotes Toews on Winnipeg, and reminds me that I still want to visit and explore that city.