police resisters: not the solution to systemic racism, but an extremely positive development 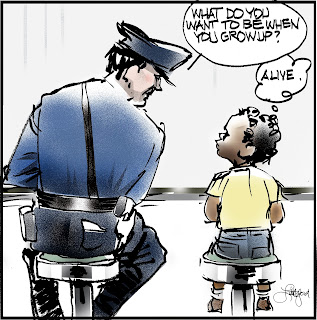 I was shocked when Detective Dmaine Freeland, an active duty officer on the NYPD force, publicly condemned the Minneapolis officer who killed George Floyd and the other cops who witnessed the murder and did nothing to stop it. To say this is unusual is a massive understatement. It's absolutely unheard of.

Being the first person to speak out in a culture that demands silence is incredibly difficult.

These men are heroes. (Calling a cop a hero -- that's a first for me!)

Soon apologies and statements started flowing from police departments across the US. By now, I'm guessing there is some pressure on departments to release these statements.

I know that police officers speaking out against the murder of George Floyd is not the solution to systemic racism. However, Freeland and the other four who broke rank should be recognized for their courage, principles, and empathy. They are resisters.

Those men are resisting a culture that caused three police officers to watch a fourth police officer murder a man, and do nothing to stop it. That culture is where so much violence and corruption comes from.

I'm guessing few among us who are not military or police can appreciate how strong the pressure of that "blue wall of silence" really is.

To my mind, those first cops who spoke out are brave and principled. Perhaps many who are now following are less so, possibly bowing to a different brand of pressure. But wouldn't pressure to have more empathy and be less racist be a good thing? Isn't that how behaviour changes -- when it becomes socially unacceptable?

This development doesn't let white people off the hook! There is so much work to do, and we all have a responsibility to do it. But only cops can change the culture of cops. That work can only come from the inside.
Posted by laura k at 5/30/2020 07:13:00 AM

And then there was officer Chris Swanson in Flint, Michigan, who actually joined protesters after they chanted that cops should join them. He seems sincere, but given cops' history of duplicity, I'm still not sure what to think about it. Here in Austin, the cops and national guard arrayed against our thousands of protesters did not respond warmly to chants that they should join us; they instead stood there stony-faced in all their body armor like Terminator or something. Then later they shot torrents of tear gas and those supposedly harmless "beanbag" rounds with big smiles on their faces into the crowds. Of course, thousands of us did manage to shut down all lanes of the major north-south interstate highway running through town, so maybe that had something to do with it, but we wouldn't have had to do that if we had had the cooperation of the authorities. We were also protesting the murder earlier this year by a cop of Austinite Mike Ramos, whose mother spoke through tears at the protests.

Ugh. They've been responding with excessive force all over the country, drowning out any possible sympathy from these resister voices.

Nice going shutting down the highway!!

He seems sincere, but given cops' history of duplicity, I'm still not sure what to think about it.

It feels significant that so many active police officers are speaking out. Or maybe it seems significant only because it's so rare. Maybe this is where the new dividing line is now. Strong, emotional words of opposition, but then business as usual. I'd like to be optimistic, but it's a long, long, long way away from true reform. We'll see.