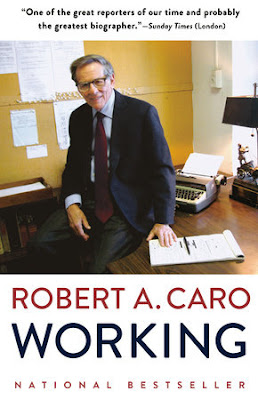 Fans of Robert Caro rejoiced when we learned that Caro, author of nonfiction histories, was writing a book about his writing process. When the book was published, I'm sure I wasn't the only one surprised by its brevity. At a slim 207 pages, Working: Researching, Interviewing, Writing is the equivalent of a post-it note for Caro, whose books are often described as tomes.

I read Working over the course of a weekend, and I enjoyed every minute of it. Not only is the subject fascinating, but Caro's warm and genuine voice is truly a joy.

If you read nonfiction and you enjoy history, and you haven't read Robert Caro, you must correct this terrible oversight. Caro's first book, The Power Broker, is considered one of the best nonfiction books of the 20th Century. It is a biography of Robert Moses, who was the most powerful man in the most powerful US city -- a man who was never elected to office and who many people, even many New Yorkers, may never have heard of.

More than a biography, The Power Broker is a history of modern New York City. It's also an examination of how cities are built, how communities are destroyed, and above all, how power is created, consolidated, retained, and wielded. When it was published in 1974, The Power Broker broke new ground in combining painstakingly detailed research with an accessible narrative flow. It is truly one of the great books of our age.

When Caro's Path to Power was published in 1982 -- the first volume of a planned trilogy about Lyndon Baines Johnson, the 36th President of the United States -- the reviews were off the charts. I wanted to read it, then as successive volumes came out, and I still hadn't read the first one, I decided I was no longer interested. That's what I told myself, anyway. Why do I need to know so much about LBJ?

The answer, of course, is that these books aren't "about LBJ". Similar to Taylor Branch's "King Trilogy" -- purportedly a biography of Martin Luther King, Jr., but actually a history of the American civil rights movement* -- the LBJ books are a history of the United States from 1940 to roughly 1970.

Looking at the US through the lens of LBJ may be particularly interesting, as he embodies the best and the worst of the potential of the US government. Wielding incredible power, LBJ committed some of the greatest acts of any POTUS, and some of the most heinous. He was both a great president and a terrible president. Caro relocated from New York to Texas to write these books.

Caro's legions of fans, including me, don't only love his work -- we genuinely like the man himself. Caro is a warm, modest, and compassionate person who speaks with a strong New Yawk accent and has never forgotten his working-class roots. Although he's a celebrated writer and has mingled with several generations of literati, he still seems like someone you could strike up a conversation with in a city park. Caro does all his own research, working only with his beloved wife, Ina.

Caro's "planned trilogy" of LBJ biographies now contains four volumes, and he's writing the fifth. At 83 years old, the author took time off from his work to give his readers something they've long been asking for -- an insight into his process.

Working is not a full memoir, but Caro says he plans on writing his memoirs after finishing the fifth LBJ book. Because of his meticulous research, Caro's books usually take about 10 years to write. If I believed in prayer, I'd keep Robert and Ina Caro high on my list.