what i'm reading: the library book by susan orlean 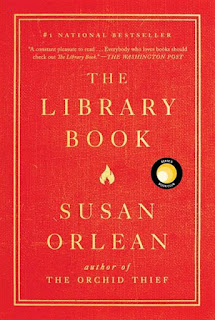 I've been on a "books about books" run lately, beginning with Syria's Secret Library, then Robert Caro's Working, and now I'm finishing the wonderful The Library Book by Susan Orlean.

Orlean is a writer for The New Yorker, which generally means excellent nonfiction. Her book about the canine movie star Rin Tin Tin has been on my List since it was published in 2011. Her 1998 book The Orchid Thief is considered a modern classic. (I read The New Yorker story that led to the book, but have not yet read the book.)

The Library Book, like most quality nonfiction, is many things. It's the story of a fire that destroyed much of Los Angeles' Central Library in 1986, and the mystery of who set the blaze, which was definitely arson. It's a history of libraries, and librarians, and a brief history of Los Angeles. It's also a short history of arson, and library fires, and probably a few other things as well. These many threads are intertwined with a smooth narrative flow and a dash of suspense.

Orlean is always a figure in her own writing. In The Library Book, she brings the reader along as she tours different branches of the Los Angeles Public Library, and discovers how contemporary libraries work -- the people who make them work, and the people who use them. Library workers will recognize all the types, and everyone else will find the characters quirky and entertaining. Through scenes and character sketches, Orleans unpacks the ever-evolving role libraries play in our world.

To say a nonfiction writer has a great eye for detail is a bit of a cliche, but Orlean sets a high standard. Her use of detail brings scenes alive, but the story is never bogged down. Her writing is always so crisp and lively. It's a joy to read.

Most reviews of The Library Book talk about libraries and how we still love and need them, but I figure you get enough of that from me already. But if you love libraries and books and hidden histories, don't miss this one.
Posted by laura k at 1/18/2020 11:05:00 AM