in which baseball makes me pull an all-nighter: 2018 world series game 3 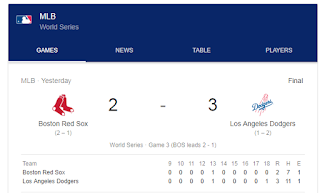 Last night, the Red Sox and Dodgers, and their fans, survived the longest World Series game in baseball history. Somehow I watched til the end and am still at work today! Joy of Sox (a/k/a Allan) says:

The clock on my desk read 3:30 AM when Max Muncy hit an opposite field home run to left-center in the bottom of the eighteenth inning, giving the Dodgers a 3-2 win over the Red Sox.

I had to work last night, rushing home at 9:15, annoyed that I had already missed 4+ innings. Ha! Allan got home from work at 12:45 a.m. -- catching the last bus of the night -- and was surprised and happy the game was still on. Little did he know there were hours still to play.

I was falling asleep between innings, and often during at-bats. If you stream games the way we do, MLB shows highlight clips -- the same clips, over and over and over -- between innings. And of course some of these clips feature the Red Sox. So I'd have the weirdly disorienting experience of waking up, seeing Jackie Bradley, Jr. make an amazing catch, robbing a player of a home run... only to realize that was a different game.

As I crawled into bed, I was sure that I'd call in sick today. But it's Saturday, we're short-staffed, I was out one day last week...so I bit the bullet and limped into work. I'm fine now. Tonight's game, however, may be a different story.