Breakfast at the Arbutus Guesthouse was a bit strange, but the lakeside view more than compensated. We went for a walk on a spit with great views of an inlet and snow-capped mountains in the distance. People were out with their dogs, lovely big dogs and some crazy puppies.

We drove around the main street area, and went into some shops. First, an antique store owned by an extremely long-winded man, who asked, "Where are you folks from?" then told his life story. I quickly ducked out, and made for a jewelry store with work only by local artists, and a gallery in the back for local painters and photographers. I was drooling over the jewelry, and managed to escape with only two pairs of earrings. (I had also bought some very inexpensive bead bracelets at a thrift shop in Sidney.) 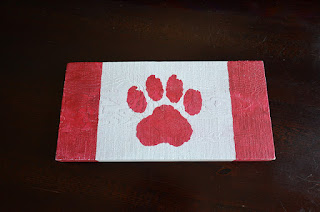 Between the antiques and the jewelry was a gift shop with all kinds of lovely local work. We bought this: a Canadian flag motif with a dog paw instead of a maple leaf. We chatted with the owner, who -- like everyone else we've spoken to here -- loves life on the island. He said he used to be a world traveler, loved to go everywhere, but since moving to VI, he hasn't been "off island" in seven years.

It was April 20 -- marijuana day -- and the local dispensary had balloons and signs out front.

We had lunch at the 17 Mile Pub, a local landmark. We had stopped in the previous night, but they were very busy and couldn't do a takeout order, and we had wanted to stay in. But while we were waiting, we had a good look at the decor -- all anti-Maple Leaf (the hockey team) stuff, ragging on the team and its fans. An excellent, friendly pub... unless you're a Maple Leafs fan.

After lunch we drove around Langford and Colwood, which can only be described as burgeoning suburbs. Sprawl is on the way. Townhouses and condos are under construction everywhere, and we saw a Walmart and Canadian Tire, the first we've seen on the island. Where is everyone coming from? Mississauga's growth is from thousands of newcomers -- our great strength -- but I don't think immigrants are flocking to Vancouver Island. Who is buying these townhouses?

We also drove around some older areas with old single-family homes. At least half of them had an RV in the driveway.

We tried to scout out a place for dinner, but didn't like any of the choices, so went to a local grocery store and an SDM and got a ton of junk food. And more wine. Another fun evening.

Sooke is beautiful, but feels really remote and rural. It seems too far away from Victoria for a sane commute, plus it will soon be on the edge of sprawl.