Greetings from the Pyramids View Inn, Cairo, Egypt. Although I don't post photos until after we return (sometimes well after!), this is one photo you have to see now. This is the view from the window of our hotel room! 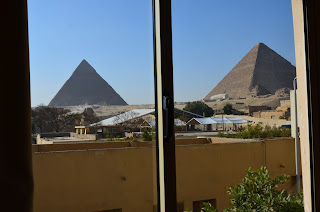 Seriously: the Pyramids of Giza and the Sphinx are immediately across from us. From our window we can see people seeming ant-size beside these mountainous structures, walking around, some on camels and horses.

So to backtrack. The flight was kind of crappy, the plane very crowded, with minimal room and not much in the way of comforts. But I prefer not to focus on those things, and not lose sight of the big picture. I don't want to become a traveler who forgets how lucky we are and can't tolerate minor discomforts. On the plus side, we flew nonstop to Cairo without delays.

It took a bit of doing to navigate the airport routine, and perhaps gave us a taste of the culture. First we waited in line at passport control, only to learn we should have purchases entry visas first. At the visa window, the staff -- smoking a cigarette, while at work! -- told us it was shift change time, could we go next door. Not another window -- a different company. That guy told us cash only, and we didn't have cash yet, so we had to get some Egyptian pounds, and start all over. It would have been funnier if we weren't so exhausted.

Passport control and customs asked us zero questions, just waved us through. And after retrieving our luggage, we saw a driver with the hotel sign, waiting for us. Yay!

And then: our first wild Egyptian cab ride. Friends who are nervous drivers and passengers, if you ever come here, you'll have to be blindfolded to avoid heart failure. The lines between lanes are only suggestions. Cars weave in and out of lanes, and between lanes, and around and through, passing and re-passing and re-re-passing, at highway speed. And our driver was answering his phone and texting most of the time! We gasped repeatedly, holding our breath as we came within a whisper of scraping cars on either side. Our driver was completely unfazed, of course. And lest you get the wrong idea, we were laughing and enjoying it.

It was a long ride, past zillions of huge blocks of apartments, and zillions of billboards in both Arabic and English. Every so often we would pass a cluster of cars and people on the shoulder, often with a large number of white transport vans. After a while we realized these were bus stops for commuters.

Once off the highway, we drove very slowly through an impoverished area. There was a lot of garbage and seemingly abandoned construction, but also many tiny cafes and food joints that were just opening for the day. We saw several people riding carts pulled by donkeys, both human and animal looking thin and tired. We saw this off and on all day -- including on the highway shoulder.

I saw a man on a traffic island stirring a huge cook pot, ready to feed people on their way to work. I was about to point this out to Allan, thinking it was a lovely sight, when he gasped and pointed. A pyramid. The Pyramid -- larger than life and visible between two buildings! We drove through some police check gates, to the hotel, with the pyramids and the Sphinx visible on the other side of the street. To quote Allan, holy shit!

It was very early, and we didn't expect our room to be ready, but our hosts carried all our things -- they wouldn't let us carry anything -- up a few flights to a small room they said we could lie down in while our room was prepared, assuring us that our real room was much nicer. We were tired and a bit cranky, and with a sleep mask on, I managed to sleep for a couple of hours.

We were woken by knocking on our door, profuse apologies, and more people moving our bags for us. A boy led us to our room, and with a practiced flourish, flung aside the curtain, revealing an unobstructed view of the Pyramids and the Sphinx.

I was desperate for a shower, so it was disappointing to discover we had no hot water. More conversations with our hosts revealed the hot water heater had been turned off, and would now need another half hour to warm up. (That is, a half hour longer than the 20 minutes we had already given it.)

The Pyramids View Inn is a bit lower budget than we usually do, the lower end of the "mid-range" scale. Our Lonely Planet guide tells us that Cairo is full of both high-end chain hotels and dingy crashes, but it can be challenging to find quality places in the middle. But the place is very clean, the hosts could not be friendlier or more helpful, and did I mention the Pyramids are right outside? It's the equivalent of about $75/night Canadian, including breakfast.

After showers and more bottled water, we asked our hosts to call us a taxi, and headed to Zamalek, a neighbourhood on an island in the Nile. Allan read that it was a great place for local eating, drinking, and people-watching. ("Allan read" will be a big theme on this trip. He's done almost all the research for the whole trip. Lucky me!) This was another long cab ride, slightly less crazy. Our driver charged 47 Egyptian Pounds (EL)... the equivalent $3.30 CAD. We did not haggle.

We quickly spotted one of the places we were looking for, a local chain with a fresh and gourmet take on traditional street food. This place -- Zööba -- was awesome. The decor, the music, the whole vibe was smart and hip but friendly and laid back. They have a huge takeout business, and they deliver, but in the middle of the small room was a long table, with pairs of people eating across from each other. We thought there was no room to sit, until one of the servers asked two women to move their bags for us. Everyone else at the table was young, female, and hip. And eating from stainless steel bowls with gusto. We were very hungry, and the menu -- in both English and Arabic -- was mouthwatering.

We ordered a bowl of koshari for each of us, and kofta and hawawshi to share. Everything was so good. Koshari is classic Egyptian street food -- a bowl of lentils, pasta, rice, and corn, in a tomato-based sauce. I had no idea what to expect, but it was totally delicious. The kofta, which is like a long meatball, very dry and flavourful, was amazing. Hawawshi is a grilled bread pocket filled with meat and ful (fava beans), with a coriander taste, similar to a meat somosa, but in freshly baked and grilled bread. We were very happy!

We asked some of the lovely young women near us about the condiments they were shaking into their koshari. One was obviously hot sauce, and the other was a lemon-garlic-olive oil dressing. After some of the w‪omen left, a large group of young men came in, very friendly and polite. It was just an awesome place at the exact time we needed it.

After eating, we walked down the Zamalek main drag, 26 of July Street. It is lined with funky shops and eateries, very obviously middle class, and everything in English. On some side streets, we passed many quiet coffee houses where people were relaxing, smoking sheesha. Lonely Planet tells us there's a coffee house and a sheesha flavour for every type and taste. I've decided that with my crazily sensitive respiratory system, I shouldn't be smoking anything. It's disappointing, as I'd like to try both the sheesha and the experience, but the idea of triggering a possible allergy or asthma attack while in Egypt is quite a deterrent.

Even in this neighbourhood among the more upscale shops, there was a lot of garbage, and random construction, and a lot of loud, noisy traffic. Kind of like the Upper West Side or Park Slope used to be! We passed a painting crew working on "scaffolding" -- sticks of raw wood lashed together with rope -- a guy standing on a rickety platform wearing no protective gear of any kind, trying to balance while rolling on paint. I could hear my union peeps all yelling "Health and Safety!" in unison. It's sad and awful that workers risk their lives like this every day, all over the world.

In the cab on the way back, the streets were even more congested and the traffic even crazier. We passed at least a dozen donkey carts walking on the highway shoulder, and once a man was driving his horse cart across at least eight lanes of snarled traffic.

Our driver wanted 100 LEs for the same trip we had paid 47 for earlier. I offered 50, and when he moaned about it, I gave him 20 more. If you're a wmtc reader, you may remember that Allan and I hate haggling of any kind ("the only good bargaining is collective bargaining"), but we are told that in certain situations here -- in the markets and in cabs -- you are expected to come back with an offer of half of what you've been asked for.

Tomorrow: the Pyramids, the Sphinx, and the rest of the Giza Plateau.