10 things you can do to fight trump-era nazism

Like all good people, I am horrified by recent developments in the US, and like everyone who has been paying attention, not surprised. I take hope from the immediate and powerful resistance that has been set in motion. But also at the resistance, I am angry, too. What took you so long? Let's hope it's not too late.

Here are a few things you can do to fight back.

1. Donate to the American Civil Liberties Union. For nearly 100 years, the ACLU has been fighting for the civil rights of people marginalized or targeted by the dominant culture. These are the people best equipped to fight back -- the best and the brightest of the resistance. Even a small one-time or monthly donation can make a difference.

2. Canadians, sign a petition calling on Prime Minister Trudeau and Minister of Immigration, Refugees and Citizenship Ahmed Hussen, demanding that they repeal the so-called Safe Third Country Agreement with the United States, which would allow Canada to welcome people fleeing violence from Muslim-majority countries and/or deportation by the United States.

You've probably seen Trudeau's tweet saying that Canada welcomes those fleeing persecution "regardless of faith". Here's an opportunity for Trudeau to make good on that statement.

Currently, if an asylum seeker residing in the US tried to enter Canada to escape deportation, Canada would turn them away, based on the "Safe Third Country Agreement". Read more about it here. Please sign the petition and ask your contacts to do the same. 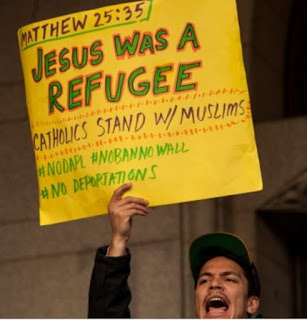 3. Call or email your MP and ask them to support the above. Say it is a matter of great importance to you, because this is the Canada you want to live in. You can find your MP here by postal code.

4. Attend a demonstration against Trump's order and in solidarity with those it targets. In the Toronto area, it's this Saturday, February 4, 12:30-2:30 pm, outside the US Consulate on University Avenue. In cities across the US and Canada, it will not be difficult to find a demo. When you find this community, keep in touch.

5. Send a letter of support to a mosque or Islamic cultural group in your community. A simple act of solidarity goes a long way.

6. Share facts. I'm always surprised by what people know, and what they don't know. I've learned not to assume. Share what you learn with your faith group, your union, your spin class, your online community, your Facebook contacts. (This one comes with a caveat. Social media is great for many things, but it is not actually a form of protest. It can be the drug that keeps us docile and not protesting.)

7. Write a letter to your local media outlet. These still matter. Keep it short and it's more likely to be published.

8. Pledge to register. If Muslims are ever required to register with the government, be prepared to register in solidarity. If you have doubts or fears about this, now is the time to discuss with your family and friends. Vow to yourself and to your community that you will do this. It would be very fitting if the first, say, 10,000 registrants were Jewish.

9. Delete Uber from your phone, and don't forget to tell them why in the "share details" box. On Saturday night, protesters streamed into airports around the US to protest Trump’s anti-Muslim executive order. The New York Taxi Workers Alliance posted this:

Uber did the opposite.

Lyft, Uber's principal competitor, has pledged to donate $1 million to the ACLU.

I freely admit that this is another excuse to ask people to #DeleteUber and never use them again. Their abhorrent labour practises drag precarious work into new depths. More info here.

10. Check out Bustle. They're full of great ideas.