solidarity from scotland to palestine via soccer 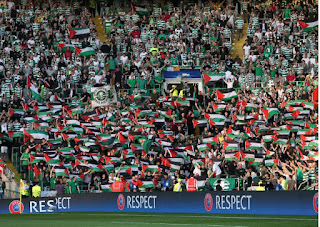 At a football (soccer) match between the Scottish Celtic team and an Israeli team, Hapoel Beersheba, hundreds of Celtic fans defied Scottish law to show their solidarity with Palestine and protest the Israeli occupation.

There could be serious consequences for Celtic thanks to the protest, carried out in front of Israelis themselves. Fines and closures of their fans seating sections are possible, under UEFA rules. And a 2012 Scottish law against provocative political speech at sporting events makes the flag display an arrestable offense, although authorities reportedly did not take the offending fans into custody. There were dozens of them, photographs show.

Although the flag politics of the region are contrarian, the feelings of political solidarity are real.

The Union of European Football Associations (UEFA) will weigh what could happen, but it might involve the closing of some of the stands in the stadium for a Champions league game, writes Neil Cameron in the Herald, a Scottish paper, in an opinion piece chiding protesters for risking the forfeiture of other fans tickets. European football carries out collective punishment against fans, apparently.