fight for 15 and fairness: brampton forum for decent work

After our members returned to work, but while I was still on staycation, I attended a community event organized by labour activists in Peel Region. It was a beautifully planned event, with music and food and lots of opportunities for participation.

Each of the three keynote speakers was brilliant and revelatory. First, Gurjeet Sran, an economist from York University, blasted through the myth that raising the minimum wage hurts the economy. (In fact, raising the minimum wage actually helps the economy.) Sran also spoke about the pressing need to raise the corporate tax rate. Even though most people in the room were familiar with these arguments, it's always good to brush up on facts and strengthen your knowledge.

Next, Monica Avero spoke about the fight for justice for workers at Toronto Pearson Airport. Avero is a Unifor member and belongs to the Toronto Airport Workers’ Council, an alliance of unionized and non-union airport workers. The conditions at Pearson -- Canada's largest workplace -- are nothing short of shocking. Minimum wage pay, constant on-call hours, inhumane shift scheduling, and no guarantee of hours are the norm. Wage theft abounds. Workers frequently sleep in the airport for a few hours in between shifts, not leaving the airport for days at a time in order to get more shifts.

If a worker can stick it out long enough to earn more than $13/hour, their contract is terminated. The work is either offered to someone else, or the same person can apply for the job at an even lower wage. Last year, hundreds of workers in the airport's refuelling, wheelchair assistance, and de-icing services were laid off and forced to reapply for jobs at much lower pay rates. At least 200 of these workers were never rehired. The previous year, parking attendants were targeted. Avero herself has been working at Pearson for 18 years; she still earns minimum wage. Welcome to the world of deregulation and privatization. 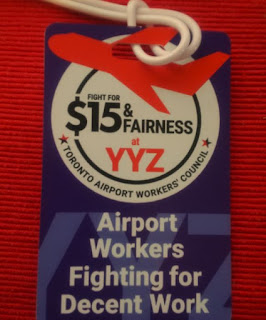 If the conditions at Pearson are shocking, the conditions for temp workers around Ontario are off the charts. Navi Aujla, a graduate student, followed in Barbara Ehrenreich's footsteps, working for temp agencies in the Toronto area. The agencies employ mainly new immigrants from racialized communities, and mostly women. As a rule, they pay less than minimum wage, expect round-the-clock availability, and are in constant violation of almost every clause in the Employment Standards Act. Many major companies use agency workers for the majority of their workforce. The agencies are completely unregulated, and what regulations there are, are not enforced.

After the main speakers, a member of the audience took the mic to talk about his situation. A Somali man, he was a successful lawyer in his home country. In Canada, his degree was not recognized (an extremely common situation), so he went back to school and became a qualified accountant. He sent his resume to 500 accounting firms and did not receive as much as a single phone call. Why would that be? His name is Abdullahi Barre, and this was in early 2002. 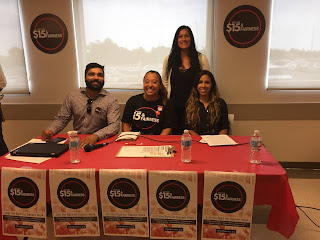 Barre took many different jobs, earning whatever wage he could. After many years, he found work as a parking attendant at Pearson Airport, and worked his way up to $14/hour. . . until everyone was fired and rehired at $11.25/hour. That's when he joined the Workers Action Centre and became active in working for change.

With the event just days after CUPE 1989's ratification vote, the organizers asked me to speak as well. It was exciting to report on a win, and to talk about how our strike energized and activated our members.

But the best part of the event, for me, was that two random 1989 members attended, on their own -- and one even spoke a bit, during the open mic portion. I don't know if either of these members had ever attended a union meeting before, and here they were at a community organizing event in Brampton. That might be the biggest win of all.
Posted by laura k at 8/14/2016 09:00:00 AM