from the front lines, day two 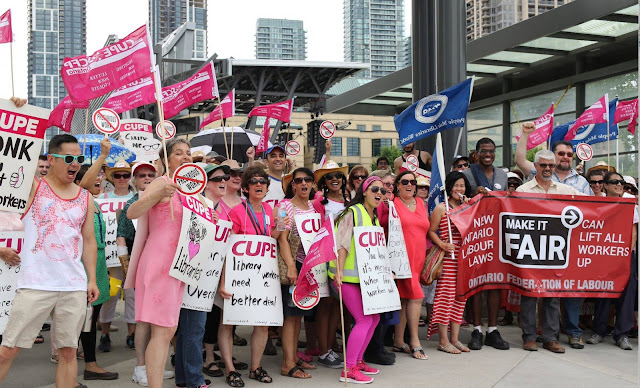 We had another great turnout on Tuesday. When I arrived at 8:30 AM, there were already 100 people making noise at our favourite corner, and another 40-50 waiting to sign in.

So what did we learn today...?

They talked about how our fight is for each other, for all library workers - and for all workers in Ontario and in Canada. We all share the same issues and struggles, so it's easy to support one another.

The rally was LOUD! and attracted a lot of attention from passing cars - and I'm sure, from our Employer as well. :)

We also received more financial donations, and donations of water and ice pops. One labour friend asked what we needed, and I said, how about some healthy snacks? A few hours later, here comes a guy with two cases of granola bars.

We are rocking social media, with big assists from other unions. If you're on Twitter, please use hashtags #saugastrike and #WhereIsBonnie. Other good ones are #StrongerTogether and #LibraryWarriors.

And speaking of Bonnie Crombie ...

Our new mayor has not yet made a public statement about the library strike!

How you can help

The most important thing you can do to support us are to call and email the mayor's office and councilors/Library Board.

Here's something I received today:

As a 7-year resident of Ward 4, a regular library user, and a member in good standing of CUPE 905, I am writing to express my support for your efforts to achieve a truly "fair and competitive" agreement for Mississauga Library staff.

I am also pasting a message I just sent to my Councillor and Library Board member, John Kovac. I hope you find that it adequately expresses my feelings on this matter.

As a 7-year resident of Ward 4 and a regular user of the Library, I am writing to you to express my deep disappointment in the Library Board in general, and you in particular as a Board member and my Councillor, for your inability to reach a fair agreement with Library staff, resulting in an entirely unnecessary disruption of service.

I am aware that Council recently voted itself a 1.75% increase for this year to a healthy $86,000 salary. Such an increase may seem comparable to the 1.5% (failing to keep pace with inflation), offered to library staff except that many of those staff need 2nd and even 3rd jobs to make ends meet. They might well have settled for a 1.5% increase if they had already been making $86,000 a year.

I am also aware of the 7.3% increase given to director of Library Services, Rose Vespa, in 2014. In light of this fact, and the fact that library staff received 0.5% that same year, it seems unconscionable to describe your entirely inadequate offer as "fair and competitive".

Public libraries are an essential building block in the foundation of any thriving and successful municipality. By being unable to reach an agreement with library staff, you have weakened that foundation. I judge this current version of the Mississauga Library Board to be a failure, you included. The municipal elections may be more than two years away, but on October 22, 2018, I will remember that failure when deciding how to mark my ballot.

Please support us! Sign our petition, and tell the City of Mississauga: Give your library workers a fair deal!