from the front lines, day five

I have been staring at my computer screen, trying to figure out how to describe the amazing day we had, and how to express my feelings about what we're creating together. Not an easy task.

Plus, my members keep posting awesome pics and vids to Facebook and YouTube and getting me distracted!!

More than 50 members gathered at the VIP parking entrance to welcome the City brass on their way to work. Apparently City Manager Janice Baker was among them! I was home responding to members' questions, but I heard it was really LOUD and really FUN. 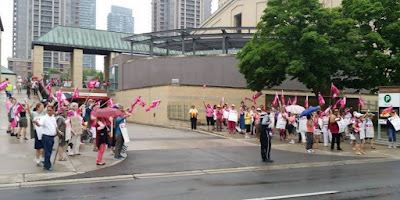 Then, sometime later, I got a call from an anonymous source who works for the City. The person said that our action drove the City nuts!! The councillors were furious, security was on the walkie-talkies calling for backup, total panic.

This source gave us a rare opportunity to see that our actions are having an impact! And that was just noise! We didn't stop any cars -- and we're allowed to!

Later in the day, a member read an email from Baker to City employees about how to deal with the picket line -- and encouraging staff to work at home. The City of Mississauga normally is not flexible about alternative working arrangements, but they're making an exception for us!

Knowing this, we decided to also say goodbye to City Hall at the end of the day. And we heard that many City workers leave early on Friday, so after the late-morning pep talk, groups of members hustled over to all the garage entrances and exits.

In the afternoon, we had a surprise visit from CUPE Ontario President Fred Hahn. Fred is a legendary labour activist -- an absolute staunch supporter of the rank-and-file (that's us) and an open, transparent, inclusive, welcoming union. He's someone I really admire, so I was excited to see him on our line!

Fred, Eddie Pereira from Peel District CUPE Council, and I walked around City Hall gathering the groups of members who were at the exits. Then Eddie showed us how it's done! We are allowed to detain people and cars going in and out of City Hall. Many of our members were amazed... in a good way!

We were having a mini pep rally, when along comes Craig, a member, calling "Possible Bonnie sighting!!" We grabbed flags and ran down to City Hall, and sure enough, there she was.

The Mayor was taking part in a small ceremony to raise the Pride flag, the first time the Pride flag has been flown at Mississauga City Hall. We formed a semi-circle around the ceremony, and were quiet and respectful while the ceremony continued. Meanwhile our allies from CUPE Ontario were deciding what we would chant when the ceremony was over!

The Pride flag went up, and we started on "2-4-6-8 Why won't you negotiate?" and other fun stuff. Meanwhile, Bobby Nand, our CUPE rep, had infiltrated the ceremony and was speaking in the Mayor's ear! Apparently security tried to stop Bobby, but seriously, is there any stopping Bobby?

Bobby said the mayor would speak with us! So we all moved into the shade, and waited quietly with our flags and our signs.

Mayor Crombie came over to us, shook my hand, and introduced herself: "I'm Bonnie." OK... I'm Laura.

I told "Bonnie": we love our jobs, we are very proud of the quality services we provide -- she said "famous for" -- and we want to work. But we want to be treated fairly and with respect. We feel our requests are modest and reasonable. And we want to return to the bargaining table.

She said: Yes, we want to talk, too. I understand the offer that was tabled was fair and competitive, but let's talk, let's get back to the table.

We shook hands, everyone cheered, and security took her away. 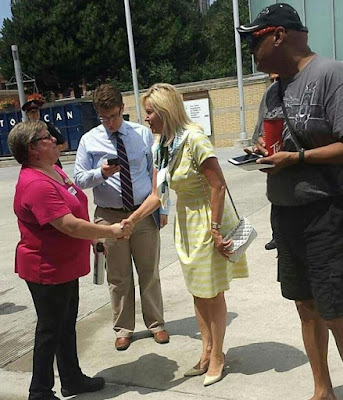 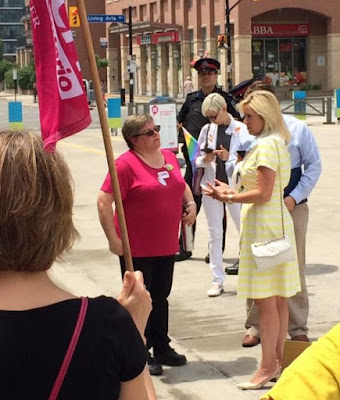 What does the Mayor's statement mean?

We will do our best to hold the City to the Mayor's wish to get us back to the table. And we will continue our strike until we have a fair contract.

Today we want to acknowledge the support of:

Michelle Bilek, NDP, Peel Regional Diversity Roundtable
Lidia, Nubian, Manjeet, and Sonia, CUPE 4912, CAS
Tim and his son Liam, CUPE 2544 & 9130
Ryan, CUPE 3902, CUPE Ontario LGBT
Victoria, CUPE 4400, CUPE Ontario Disability
Ilija, CUPE 1006A, for being out there for us every single day
Harman & Julia, Kind snacks
Sandi's husband who brought us freezies
Lucy who brought homemade cookies
Eric who brought watermelon -- and a bugle!
With apologies because I'm sure there were others!

A word about leafletting

City security has been telling us we are not allowed to hand out flyers in some places, and allowed to in other places. This is not true. The City has instructed security to say this, and the City is hoping we don't know any better, and we'll go away.

But we are participating in a legal strike. It is our right -- guaranteed by the Canadian Charter of Rights and Freedoms -- to express ourselves and associate freely. Leafletting falls under that right. We will always be respectful, of course, but there's no such thing as not allowed to distribute flyers in a public, City space.

We are not picketing on the weekend

Time to rest, relax, enjoy our family and friends, wash our pink shirts, and see each other on Monday.

Congratulations to us on making through our first week of striking!! I'll close this update with a quote from a member, from after the City reneged on its agreement to honour pre-approved vacations.

They're making the hazardous assumptions that we lack resilience, strength, intelligence, spirit, energy, and, of course, Solidarity.

Low blows by the city might sting but won't knock us out. They're underestimating us and it's a mistake.

I know that everyone is out there grinding the pavement and hustling to send our message. I'm not surprised because it's the same hustle and strength we bring to our jobs every day. We are the ones on the front lines making libraries work and connecting with customers on so many different levels.

We're not made of fragile glass. We won't break that easily. 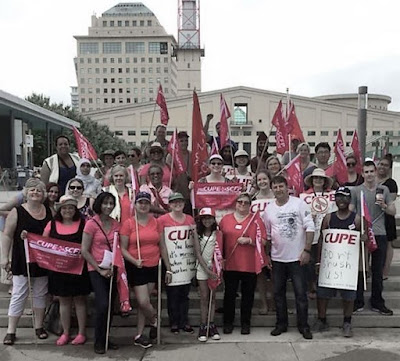