what i'm reading: soul made flesh: the discovery of the brain and how it changed the world 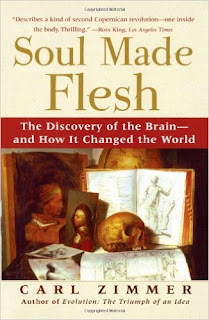 The ancient Egyptians, when preparing a body for mummification, carefully preserved the heart, liver, lungs, and other vital organs in special canisters, now known as canopic jars. The brain was yanked out and throw away as trash. A millennium or two later, human knowledge of the workings of the brain was every bit as erroneous and incomplete.

Until the 1600s, no one knew what the brain did or what function it served. Even William Harvey, the pioneering British scientist who discovered the circulatory system, believed the heart was the centre of human thought and consciousness. Less enlightened but highly influential schools of thought postulated that the human body contained four souls: animal, vegetable, rational, and material. Other theories counted up to seven souls. Descartes and Hobbes, those pillars of the Age of Reason, believed in an anatomy that contained at least a few souls.

At the beginning of the seventeenth century, no one knew what the brain did, and no European had ever seen an intact human brain. By the time the century had ended, the most common conceptions of man, god, and the universe had been upended and replaced.

Soul Made Flesh: The Discovery of the Brain and How It Changed the World by Carl Zimmer is the story of that scientific revolution, a fascinating, complex tale of the birth of neuroscience. The relatively unknown and unheralded Thomas Willis, part of the group of scientists and philosophers known as the Oxford circle, brought the brain and its functions into the fore, and began scientific method into the bargain. Zimmer tells the story against a historical and social backdrop of English civil war, regime change, and religious persecution.

People frequently say "The more things change, the more things stay the same," expressing the belief that throughout history, the details may change, but basic humanity does not. Soul Made Flesh exposes the fallacy in this thinking. In a pre-scientific age, people interpreted their world in completely different ways than we do now. The questions they asked, and the arguments they defended, were as different from the questions of our time as those of the believers of Zeus or Quetzalcoatl.

I recommend this book with one caveat. Seventeenth century Europeans had very different ethics and mores than we do. Willis and his fellow scientists performed experiments on live animals, and more than a few humans whose lives were not thought valuable, such as condemned prisoners. I am not squeamish about medical details, but my compassion for animals made parts of this book difficult to read.
Posted by laura k at 9/19/2015 10:00:00 AM