what i'm reading: the doubt factory, a young-adult thriller by paolo bacigalupi 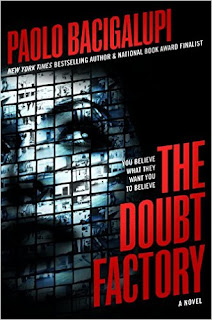 A thriller about public relations? And for teens? It sounds improbable, and The Doubt Factory by Paolo Bacigalupi is an improbably terrific book. Marrying a somersaulting plot with heart-pounding suspense to an unabashed political agenda and a hot love story, Bacigalupi has delivered a stunning youth read.

On the political front, we contemplate "the place where big companies go when they need the truth confused. . . . when they need science to say what’s profitable, instead of what’s true.” All the tricks of the trade - astroturfing, fronts, false flags, sock puppets, money funnelling, stealth marketing, planted news, and outright false data - are touched on, along with the human damage they cause.

And the political is nothing if not personal. Alix leads the good life of a private school girl in Connecticut, and is forced to confront the possibility that her privilege is built on other people's pain. That pain is impossible to miss, when she meets a group of homeless kids, all orphaned, one way or another, by her father's handiwork.

Pharmaceuticals, pesticides, fossil fuels - you name it, Alix's dad has helped confuse the public, shield wrongdoers, and ultimately cause the death of thousands, while a few brave class-action litigants are painted as selfish and greedy, and those who say otherwise are branded as conspiracy kooks.

Alix is attracted - perhaps dangerously so - to a young man who turns out to be the leader of a radical group focused on exposing her father's complicity in all that suffering. Betrayal lurks behind every door, but who will betray, who will be betrayed, and who will be exposed?

My only minor complaint is that the political agenda gets a teensy bit preachy at times. Preachy politics in fiction are usually a dealbreaker for me, but with The Doubt Factory, I was so hooked by the plot and the suspense that I didn't mind. More importantly, I don't think young readers would give it a second thought.
Posted by laura k at 9/27/2015 01:00:00 PM