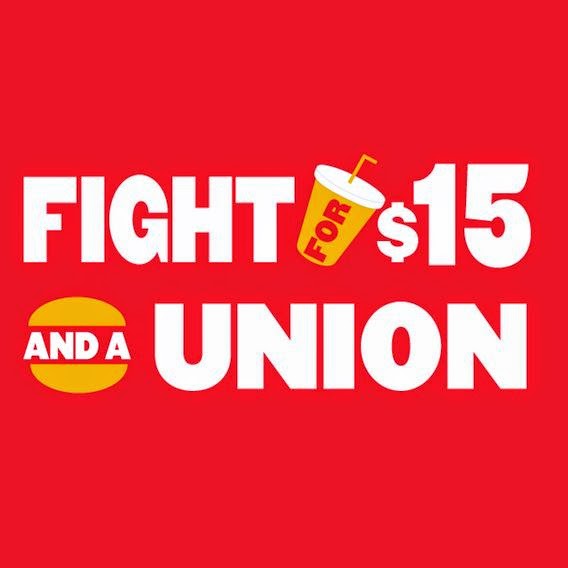 The resurgent workers' movement scored a huge victory earlier this year, when Walmart announced it was raising wages - a step on the road to a true living wage and the right to unionize without fear of harassment. Other big corporations, such as Target, TJ Maxx, and Marshalls, followed with similar wage-hike announcements.

Naturally, it sounded like another important victory when McDonald's announced it was raising wages to $10/hour... until we read the fine print.

On Wednesday, McDonald's followed the lead of fellow low-wage employer Walmart, announcing a small raise that puts its starting pay at $1 above the federal minimum. By Thursday, however, workers had taken to the streets to protest what some are calling a PR stunt by the word’s largest fast food chain.

At issue: McDonald’s new $8.25 per hour salary applies only to the 90,000 employees at company-owned restaurants, not the 750,000 working for franchisees who decide their own pay policies. Some 90% of those making their living under the Golden Arches won’t see any change in their wage.

In New York City, workers and their supporters swarmed the streets outside a midtown McDonald's location, exposing the reality of the corporate giant's PR announcement. Gothamist - steadfastly in the workers' corner - spoke to some of the protesters.

Julia Andino, 20, from Brooklyn, works at a McDonald's on Broadway in Manhattan. She has a two-year-old child, and struggles to make ends meet. "My son is three, I have a $900 room I rent, I have bills, hospital bills I have to pay... supermarket, gone, babysitting services. Diapers, gone. It's difficult to live off. $15 isn't a lot, but it's something we can work with," said Andino. "This city will either eat you and spit you out, or you have to live. And I feel like it will be fair when I can come home and not be sitting on my bed crying because I can't maintain my son and my family."

This PR-driven wage increase that leaves 90% of workers behind shines yet another spotlight on extreme income inequality. Even a McDonald's that sees its profits plunging still reports billions in profit each quarter, and still supports a multimillion-dollar CEO. An article titled "McDonald’s $8.25 Man and $8.75 Million CEO Shows Pay Gap" compares "life in one of America’s premier growth industries" on both ends of the ever-widening spectrum. At the low end, life is a a constant struggle against homelessness and starvation.

Twenty years ago, when Johnson first started at McDonald’s, the CEO’s compensation was about 230 times that of a full-time worker paid the federal minimum wage. The $8.75 million that Thompson’s predecessor as CEO, Skinner, made last year was 580 times, according to data compiled by Bloomberg.

McDonald’s is part of a larger trend of Standard & Poor’s 500 companies, according to data from the American Federation of Labor-Congress of Industrial Organizations. The pay gap between the average S&P 500 CEO and the average U.S. worker, which was 42 times in 1980, widened to 380 times in 2011 from 325 times in 2010, the umbrella group of 56 unions said.

The article quoted above makes excellent reading. What does it say about the current state of capitalism when the best stories about income inequality are from business venues like Bloomberg and Forbes?

On April 15, workers throughout the US will take to the streets in record numbers, demanding $15/hour and a union. This isn't just about Walmart and McDonald's, although the fight against shameful working conditions at those massively wealthy corporations has propelled the movement forward. It's about all people who work for wages that keep them in poverty, and in conditions that keep them afraid. As the Fight for 15 website says:

Millions of underpaid workers can’t support their families or make ends meet on hourly wages that haven’t kept pace with the bills – or their employers’ profits.

Enough! On April 15, fast food cashiers and cooks, retail employees, child care workers, adjunct professors, home care providers, college students, airport workers, and all of us who believe they deserve better are showing up in cities across the country to say ENOUGH. Be there.

In a movement that's been steadily growing for many years, the April 15, 2015 action undoubtedly will be the biggest demonstration yet, as more and more workers are emboldened to come forward.

You can support the struggle: by joining a demonstration, by visiting a picket line with words of support, by contacting McDonald's and other employers to tell them you support the workers' struggle, by Tweeting, by sharing on Facebook, and especially by donating.
Posted by laura k at 4/05/2015 05:00:00 AM