what i'm reading: stuff: compulsive hoarding and the meaning of things 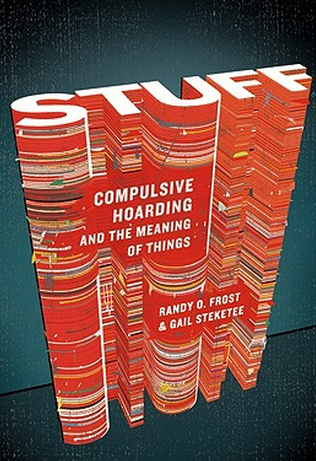 Hoarding is a hot topic these days, and often approached through a lurid, sensational lens - eccentric recluses and their hoards of junk are exposed for public entertainment. You'll find none of that in Stuff: Compulsive Hoarding and the Meaning of Things by psychologists Randy O. Frost and Gail Steketee. Instead, the book is rich with insight based on solid research, combined with large doses of empathy, patience, and compassion. The book was written to help hoarding sufferers and the people who love them recognize and understand their affliction, and begin to seek help.

The words sufferers and affliction are appropriate, as readers of this book will learn. Hoarding is a serious psychological disorder that ruins lives. People with comfortable incomes live in poverty, marriages end, families are wrecked, children grow up isolated, fearful, and ashamed, all because of an addiction to amassing things, and a total inability to part with any material object.

Many people love to collect things, and most people in our culture attach emotional meaning to certain objects - things that we would find painful to lose or have taken from us. What distinguishes the healthy collector or saver from a hoarder is the same metric applied to most addictions. Does this behaviour cause distress? Does it interfere with a person's health and happiness? Frost explains:

Many of the people we see experience great distress because of their hoarding. Acquiring and saving things has wrecked them financially and socially, driven their families away, and impaired their ability to carry out basic activities of living.

Stuff is organized around personal case studies, people who generously (and anonymously) shared their painful stories with the researchers, and whose stories illustrate the strange signatures of hoarding addiction. Although not written in a tabloid style, the stories themselves are nonetheless amazing and sometimes horrifying.

You'll meet wealthy brothers who fill up their huge apartment until it's no longer habitable, then move to another apartment - and fill that up, and move again. You'll meet people who cannot drive by a mall without buying dozens, hundreds of items - although they have no money to buy them with and no space to put them. Then they don't allow anyone to touch what they buy. There are people who cannot part with a single piece of paper - not a cash register receipt, not a coupon flyer - ever, for any reason. There's the woman who collects cookbooks, piled so high on every kitchen surface that her kitchen is completely unusable.

Many strange and fascinating features come to light. For example, when a person who hoards sees photographs of her own home, she doesn't recognize it, and cannot - does not - believe it is the place she lives in. She's disgusted and wants to change. But when she's in that same home, within her hoard, she doesn't see it at all and believes it to be perfectly normal.

The authors show that help is possible, but progress is typically slow, painful, and yields only partial success. Forced clean-outs - often undertaken by a department of health, at tremendous expense - produce only short-term success. As the underlying issues that cause the hoarding behaviour have not been addressed, the hoarder re-fills the space, often within days.

Not only are the forced clean-outs ineffective, they are dangerous. There are several documented cases of forced clean-outs being followed by suicide. This reminded me of the horrific advice of some pseudo-professionals who counsel families of children (and dogs) with phobias to "flood" the sufferer with massive amounts of what they fear. The results are predictable and tragic: permanent trauma, often with dangerous, violent expression.

Yet these forced clean-outs may be necessary: hoarding is associated with extreme health and safety issues - malnutrition, fire hazards, and vermin, to name only the obvious few. (Readers with insect phobias are strongly cautioned: do not read Chapter 9! I wish I hadn't. My stomach still churns at the thought.)

The famous Collyer Brothers of New York City, whose names have become synonymous with hoarding, were killed by their hoard. Homer Collyer was incapacitated and depended on his brother Langley to feed him. One day, Langley tripped one of his own traps, and suffocated to death under a crush of bales of newspapers. Without Langley to attend him, Homer died of a heart attack caused by starvation. Homer's emaciated body was found first. After three weeks of excavating, workers recovered Langley's body - which had been only 10 feet away.

When the rumour spread that the brothers had died, it took police hours to create even the tiniest crawl space to enter the Harlem mansion. In the first two weeks of work, workers removed 19 tons of debris, and had barely made a dent. Even more amazing is the fact that the Collyer Brothers were not unique in the annals of hoarding. Stuff is full of many such extreme stories.

The psychological underpinnings of hoarding are complex and only partially understood. The defense mechanism known as avoidance is definitely in play. People who are afraid of experiencing any anxiety, unhappiness, or loss - all normal parts of life - find that shopping and accumulating temporarily assuages these feelings. By constantly employing avoidance techniques, they never learn to cope with these normal feelings - never build up the requisite strength and maturity to withstand ordinary stress - thus creating a cycle of dependency on the drug of accumulation.

During therapy, a hoarding sufferer can gradually - oh so very gradually - learn to face unpleasant feelings, learn that they can withstand those feelings, and can gradually begin to let go of their coping mechanisms. Frost and Steketee also point to other traits shared by most hoarders, such as an ability to find beauty and meaning in absolutely everything, no matter how seemingly trivial, and extreme indecisiveness.

Many readers who are not hoarders themselves may recognize hoarders in their own families. Children of hoarders grow up afraid and isolated, ashamed to allow outsiders to see the condition of their homes, learning to lie easily as they create cover stories for their parents, similar to children of substance abusers. Children of hoarders often don't realize that their "big secret" - as one adult child of a hoarding parent called it - is a recognized problem, that other households like theirs exist. Children of hoarders have found support, comfort, and coping advice through online and in-person support groups.

The final chapter of Stuff was especially interesting to me: the authors frame hoarding in a social context. Although hoarding has been documented over centuries and in many cultures, it appears to be more prevalent now than ever, a psychological disorder of our age. Consumer culture, which encourages acquisition and measures value according to things, would seem to lead inexorably to hoarding. We live in a world of buy, buy, buy, more, more, more.

If an attachment to material wealth is seen on a continuum, with an ascetic refusal of all materialism on one end, and hoarding on the other, what is "normal" in our culture falls much closer to the hoarding end of the spectrum. The authors reference the psychoanalyst and philosopher Erich Fromm, who contrasted a life defined by having versus a life defined by being. Fromm forecasted a society obsessed with possessions, where people were obsessed with having, in an addictive cycle of acquisition, fleeting happiness, followed by the need for more acquisition, but never finding satisfaction.

Forty years ago, facilities for storing unused personal possessions were virtually nonexistent. Now nearly two billion square feet of space can be rented for storage in more than 45,000 facilities, and most of that space [2 billion square feet] is already full. In March 2007 the New York Times reported that self-storage unit rentals had increased by 90 percent since 1995 and more than 11 million American households rented outside storage space.

Frost explains that this is not temporary storage for people who had just moved. It is long-term storage - like a huge extra closet that you pay for, for stuff you never see or use.
Posted by laura k at 3/06/2015 02:00:00 PM