what i'm reading: the death of santini, by pat conroy 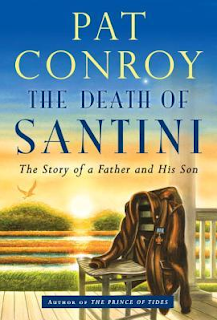 Readers over a certain age may remember Pat Conroy as the author of "The Great Santini," the novel and later, a movie for which he wrote the screenplay. The movie starred Robert Duvall as an aggressive, bullying father; the son was played by Michael O'Keefe. Conroy is probably best known for The Prince of Tides, a hugely popular novel from the mid-80s, adapted into a movie starring Barbra Streisand and Nick Nolte, directed by Streisand. Conroy has written many other novels and screenplays, and in general has been a highly successful writer.

A recurring theme in Conroy's work - present, apparently, in everything he writes - is a highly troubled family, featuring at least one person who is suicidal, and a cruel, bullying, abusive father. Although readers should never assume that a writer's work is autobiographical, this motif recurs with such regularity in Conroy's work that it's difficult to avoid the question. And in this case, the assumption would prove correct, and then some.

Conroy's father was indeed the model for the fathers portrayed in The Great Santini, The Prince of Tides, The Lords of Discipline, and all his other novels - with one huge difference: the fictional abuse was softened, diluted. Hollywood wouldn't have made a movie showing the real "Santini" - Conroy's father - nor would millions have loved The Prince of Tides. The story would have been too brutal, too heartbreaking for popular fiction.

Donald Conroy was a violent, sadistic man who beat his wife and his male children, brutally and often. Anyone who wasn't the victim of outright violence grew up with the terror of witnessing it and the fear of its wild unpredictability. Conroy the father told his children they were worthless losers, at every opportunity. And Conroy the writer was compelled to write his family into fiction, again and again. As Conroy says in this book's prologue:

I've been writing the story of my own life for over forty years. My own stormy autobiography has been my theme, my dilemma, my obsession, and the fly-by-night dread I bring to the art of fiction.

The Death of Santini: The Story of a Father and His Son is, in part, a literary exorcism, the writer's attempt to purge his father from his life at last. The book also explores the experience of transforming family members into fictional versions of themselves, and their reactions to appearing as characters in print and on screen. They are by turns outraged, mortified, and thrilled, and they sometimes seem to imagine that they are the characters, larger than their own lives. The reactions of Donald Conroy to his son's constant fictional versions of him and his horrific behaviour are the most fascinating and compelling part of the book.

Conroy's writing can be ornate, overheated, and melodramatic, and will not be to everyone's tastes. He is prone to sweeping statements that can sometimes seem a bit self-important. Given to understatement he is not. But his writing is vivid and powerful, often moving or disturbing in all the right ways.

My childhood taught me everything I needed to know about the dangers of love. Love came in many disguises, masquerades, rigged card tricks, and sleights of hand that could either overwhelm or tame you. It was a country bristling with fishhooks hung at eye level, man-traps, and poisoned baits. It could hurl toward you at a breakneck speed or let you dangle over a web spun by a brown recluse spider. When love announced itself, I learned to duck to avoid the telegraphed backhand or the blown kiss from my mother's fragrant hand. Havoc took up residence in me at a young age. Violence became a whorl in my DNA. I was the oldest of seven children; five of us would try to kill ourselves before the age of forty. My brother Tom would succeed in a most spectacular fashion. Love came to us veiled in disturbance - we had to learn it the hard way, cutting away the spoilage like bruises on a pear.

Reading about the violence that Conroy, his mother, and his siblings endured, I wondered that any of them made it through with their selves and their sanity intact. Indeed, some did not. I also wondered, again and again, what made Donald Conroy such a violent and hate-filled man.

This book would especially interest people who read and enjoyed The Prince of Tides and other works by Conroy. But anyone with an interest in how life and fiction interact may find The Death of Santini a fascinating, if not always pleasant, read.
Posted by laura k at 2/03/2015 05:00:00 PM