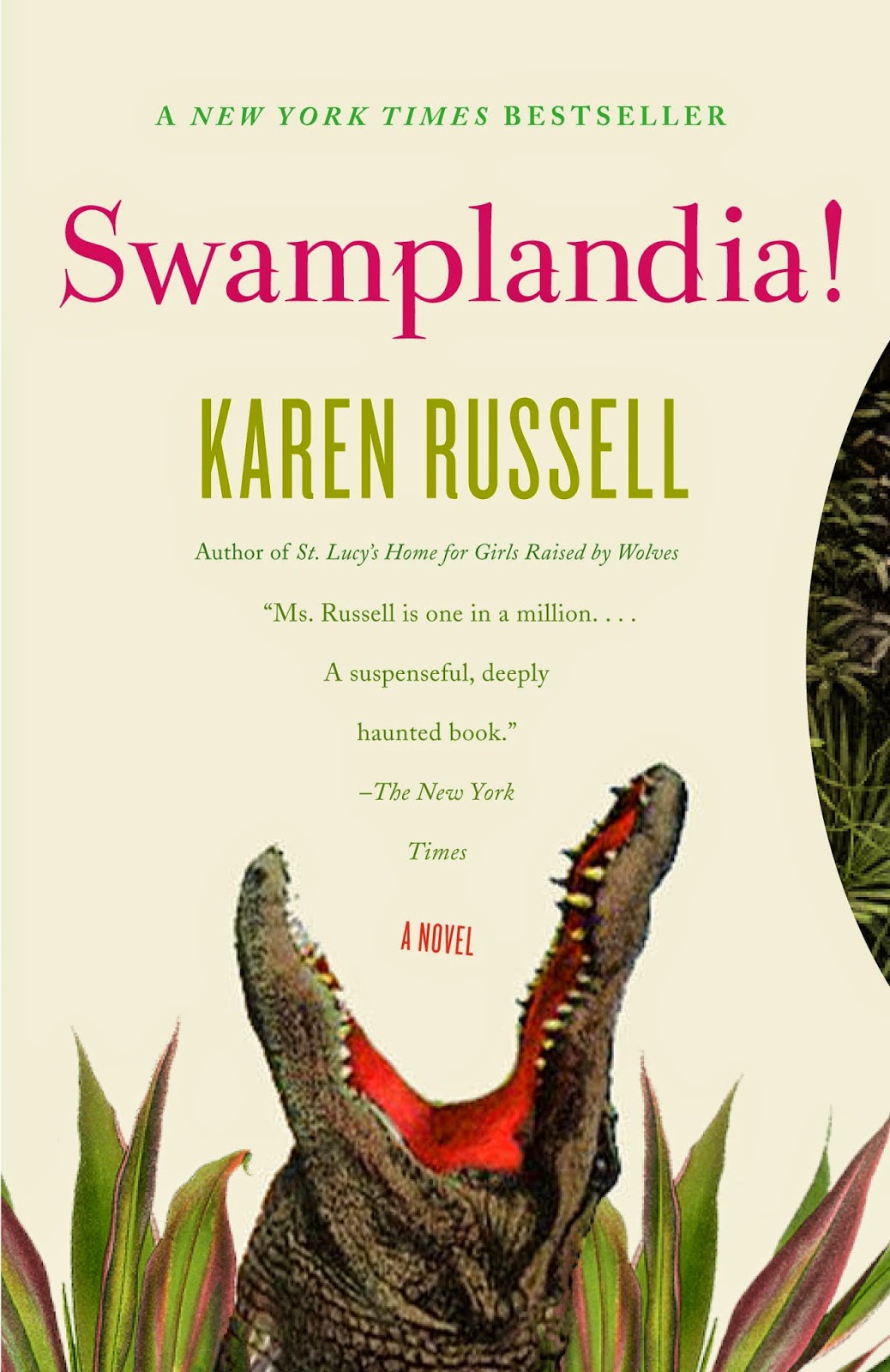 Swamplandia! caught me by surprise. At first, Karen Russell's debut novel seemed like a quirky family story, a strange and somewhat sad tale told with great wit and humour.

Then it deepened, became (possibly) supernatural - or is that just the fantasy of a troubled girl? Then it quickened, and became suspenseful, and dangerous, and a bit heartbreaking. Step by strange step, I was hooked. Swamplandia! is not an easy book to describe, but more importantly, it's not an easy book to put down.

The Bigtree family lives in Swamplandia!, an old-fashioned roadside-attraction theme park deep in the Florida Everglades. In this case, the road is a swamp, tourists and any connection with the mainland world arrives by ferry.

Hilola Bigtree, matriarch of the strange brood, mother of the teenaged narrator, has died. (Not a spoiler.) Thirteen-year-old Ava Bigtree thought her mother's death was the bottom, the end. But the demise of famed alligator wrestler and main attraction of Swamplandia! was only the first link in a chain of events that would take Ava and each member of her family much farther down, into separate hells, and finally, to redemption.

If that sounds spooky or melodramatic, it is. But it's also very funny, and strange, and utterly credible, even when it's not remotely possible. The novel's quirkiness is reminiscent of John Irving at his best; the gallows humour not unlike Frank McCourt or Roddy Doyle. But the story and the language are deeply original.

Russell's language is as quirky as her story. "A brownish-orange algae that...could draw its pumpkin lace across the entire Pit overnight"; a tiny red alligator whose "skull was the exact shape and shining hue of a large halved strawberry". A poor boy's pennies are "a lintlike currency, value that collected in corners"; a chubby boy's jeans on her slim brother "fit him like a puddle"; the white jaw of an alligator "fell open like a suitcase". In Stiltsville, an abandoned swamp community, Ava awakens to "dawn light screaming through the doorways that hung on their hinges, the broken windows that birds could fly through, the plank lace, the cheesed metals".

The voice of Ava Bigtree, the narrator, is a stylistic triumph. Russell doesn't try to mimic the speech of a 13-year-old who has been raised in social isolation. Instead, she gives us a young girls' thoughts and mindset delivered in rich, adult language. It works.

The portion of the book that follows Kiwi Bigtree, Ava's brother - working in a Hell-themed tourist attraction, and his own private hell - is told in the third person. The switch is a bit jarring at first, but as Ava's story darkens, Kiwi's story becomes funnier and more hopeful. Alternating between the two threads builds suspense: the reader wonders how it will all come together, and how bad things will get before it does.

There are also stories within the story (John Irving-esque again). These are told with such precision of emotion and empathy, that, although impossible, they blur the distinction between reality and fantasy. The reader grapples with that issue along with Ava.

And throughout: the swamp. The untamed and untameable water-land, its wild beauty, its mysteries, its dangers, coexisting with the mundane world of bored mainland teenagers and tourists. The alligators, so vital to the Bigtree family's survival, are death machines lurking beneath every surface. But neither the Bigtrees nor the alligators are the most dangerous beasts on the swamp.