towards a cruelty-free face: switching to products not tested on animals 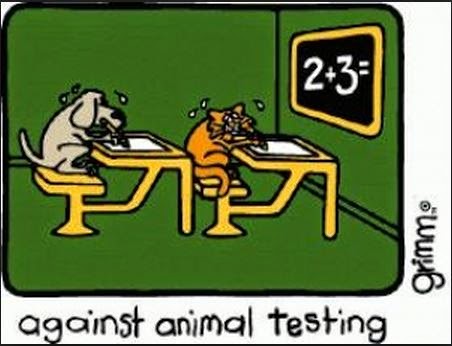 I've begun changing my personal care products to cruelty-free: natural products from companies that are better for the environment and don't test on animals. I'm not sure how far I'll be able to go, but I've begun the process.

After a lifetime of using conventional products, I was moved to think more about this by a few different sources.

When I worked in the children's library, I often saw a book about animal cruelty. It was not the one I wrote about here, about dogs, but a book in a series called "Tough Issues," similar to the kind of series I used to contribute to. This "tough issue" asked the question, "Why do people harm animals?" It's a good book, one that successfully treads that very careful line separating honesty from the overly graphic. Even so, there was one image that burned in my brain. (I know this image would have been highly disturbing to me as a child. Considering I saw the image in a children's book, this is very bad.) And now that image from that book joins the panolpy of disturbing images that I will never be able to un-see.

Another source: I belong to the Humane Society International (or HSI Canada), and their excellent advocacy against animal testing has influenced me.

The rational case for using animals in medical research has ended: as one prominent researcher says, "Whatever you discover, you will have to re-discover using people, so not only do the animals suffer using these experiments, the first few patients using these novel treatments will suffer, too." Using animals to test cosmetics and personal-care products shouldn't even be controversial. It is absolutely cruel and unnecessary.

Eliminating animal testing of cosmetics is entirely feasible. In the past three decades scientists have developed many advanced alternatives to animal testing—methods that use human blood, cell lines, artificial skin or computer models to test the safety of products. And many multinational companies have embraced these alternative test methods, reducing and in some cases eliminating their dependence on animal testing. As a result, they cut costs and save time; animal testing is expensive, slow and, because animals are not people, not always predictive.

The movement to eliminate animal testing extends beyond the cosmetics industry. In 2007 the National Academy of Sciences issued a report recommending that the U.S. Environmental Protection Agency fundamentally change the way chemicals are tested for human health risks. Through a greater reliance on in vitro testing, researchers could evaluate the effects of chemicals on biological processes while using very few animals. Scientists would generate better data and test a greater number of chemicals more quickly and cheaply.

And then there are microbeads. Perhaps I was the last person in North America to learn about microbeads, but the news finally reached me.

Tiny particles of plastic have been added to possibly thousands of personal care products sold around the world. These microbeads, hardly visible to the naked eye, flow straight from the bathroom drain into the sewer system. Wastewater treatment plants are not designed to filter out microbeads and that is the main reason why, ultimately, they contribute to the Plastic Soup swirling around the world’s oceans. Sea creatures absorb or eat microbeads. These microbeads are passed along the marine food chain. Since humans are ultimately at the top of this food chain, it is likely that we are also absorbing microbeads from the food we eat. Microbeads are not biodegradable and once they enter the marine environment, they are impossible to remove.

Although I used products that contain microbeads, I never asked, "What are the scrubbing particles in this product made of?" Indeed, I never even thought of it. But now I have learned that a few products I buy regularly contain these tiny plastic particles that go straight to our water supply and into animals. And so, microbeads became the final kick in the pants I needed.

I looked into cruelty-free products on line, mostly at Leaping Bunny and GoCrueltyFree.org, but I was quickly overwhelmed. There are so many products... where to begin? Then I remembered my dictum from other changes I've made: away from all-or-nothing thinking. This cheered me up.

I decided to start with two products: face cleanser and scrub, since these are most likely to contain microbeads. This would also allow me to stop buying products made by Procter & Gamble, a name found on boycott lists for decades.

The next time I was in Whole Foods, I talked to the person in the "Whole Body" department. She showed me several alternatives. I decided on products by Green Beaver, a Canadian company with an interesting genesis.

As young scientists, Karen was a biochemist with experience in the pesticide industry and Alain was a microbiologist working for the pharmaceutical industry. We were both appalled by the amount of chemicals found in kid’s shampoos, bubble baths and other products. Given our background, we decided to do something about it. We quit our jobs and left the chemical industry behind to create healthier, natural products for your family and ours. We wanted to make a difference, and this is our story.

The scrubbing particles in Green Beaver's grapefruit and aloe scrub are made from bits of bamboo.

Michael Pollan, Eric Schlosser, and others who have written about the horrors of the industrial food chain often note that the only way we can live with such a disgusting and inhumane system is by purposely not knowing about it - by willful collective ignorance. (This is the same ignorance collectively employed about capital punishment in the US, now unraveling thanks to activists forcing people to see.) We don't want to know where our cheeseburger comes from. We don't want to know about the feed lot, the gestation crate, the chicken prison, the killing floor. Or the lab prison.

Most people want to avoid thinking about cruelty to animals. We don't want to know about it. We especially don't want to know that we're complicit in it! And our closed eyes allow it to continue.
Posted by laura k at 11/08/2014 03:00:00 PM