I trust by now you've all heard about Stephen Harper's latest plan to undermine democracy in Canada, his electoral reform bill that the chief electoral officer of the country has called an affront to democracy.

Chief Electoral Officer Marc Mayrand told CBC: "My reading of the act is that I can no longer speak about democracy in this country." Now, as per usual, the Harpercrats want to pass the bill before it can be properly debated. It was just introduced a few days ago, but could be adopted by the House of Commons as early as today or tomorrow.

The so-called Fair Elections Act would: 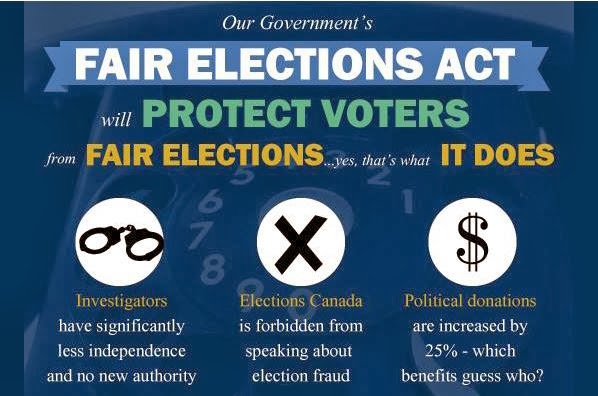 - make it more difficult for people to vote,

- do nothing to bring to justice the people behind the widespread election fraud in 2011, and

- would actually make it harder to catch perpetrators of election fraud.

The Council of Canadians sent an action alert about this on Friday, and in just 24 hours, an astounding 20,000 people signed a petition calling on Stephen Harper to "investigate and prevent electoral fraud with a truly fair Elections Act". You can sign the petition here.

Now the Council is asking us to (literally) voice our concerns. Today, Monday, February 10, there will be a mass call-in to all Members of Parliament, asking them to take the time to properly study this bill and address its many shortcomings.

If you live or work in Ottawa, you can grab your cell phone and join the Council of Canadians at 12:30 p.m. on Parliament Hill. MP Craig Scott, Official Opposition Critic for Democratic and Parliamentary Reform, will be there to accept the petition.

Everyone else, please take a few minutes today and call your MP. Tell her or him you expect to see open debate on a bill of this importance, and you want to at least see the worst aspects of the bill scrapped.