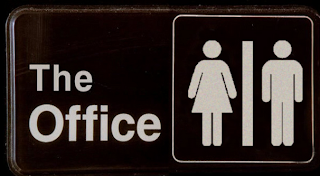 In my fine tradition of watching TV shows and movies - and then writing about them - months or sometimes years after their release, I recently finished the final season of The Office (U.S.).

I had seen many episodes of this show in re-runs and in random order over the years. When we started streaming Netflix, I re-started the whole series from S1e1. (Watching shows and movies end-to-end is my favourite thing about streaming. I'm completely gaga over it.) There was a brief pause while I waited for the final season (S9) to hit Netflix, then I finished it last week.

I was surprised by how satisfying I found the final two episodes of the show. But I was not surprised to see that these episodes were written by Greg Daniels, who developed the US version of the show.

When I first started the final season of The Office, I thought the show had jumped the shark. The writers were resorting to cheap gimmicks and repetition, not to mention the dreaded New Characters Out of Nowhere. I was still going to watch: I had come that far, and I need my half-hour-before-sleep TV viewing. So I persisted, but it wasn't very funny.

Then to my surprise, as the season went on, I began to find The Office compelling again. There were problems: Ed Helms' character often devolved into a faux Michael Scott, and some of the Schrute family farm adventures were too contrived for my tastes, among other issues. But as the story arcs moved towards closure, I once again found the show funny and sweet and credible in all the right ways.

The final two episodes were great. I loved the Dwight and Angela wrap-up, loved Mindy Kaling and B. J. Novack's ridiculous, hilarious return, and I especially loved the bits of wisdom in the final interviews. Pam reminds us that beauty is found in ordinary things, and Andy wishes we could recognize the good times while we're living them. Above all, Pam recognizes the need for carpe diem.

Jim was five feet from my desk, and it took me four years to get to him. It would be great if people saw this documentary and learned from my mistakes. It would just make my heart soar if someone out there saw this, and she said to herself, Be strong, trust yourself, love yourself, conquer your fears. Just go after what you want. And act fast, because life just isn't that long.

The brilliant final episode of The Office reminded me that some of my favourite sitcoms have been workplace comedies, the ones I grew up on: the groundbreaking "The Mary Tyler Moore Show," the dry "Barney Miller," and later, "Taxi". Even "M*A*S*H", at its heart, was a workplace comedy. (I was never a fan of "Cheers". I didn't hate it, but I never really cared about the characters.) They always demand a steady suspension of disbelief, since we know they don't reflect real life. But when you can care about the characters, and when credible situations and relationship develop, they can be very compelling. I wonder if I had been able to watch The Mary Tyler Moore Show or Barney Miller end-to-end, if either would have held up.

An aside (since someone is sure to ask): I hated the original The Office (U.K.). I have seen very little of it, because I absolutely Could. Not. Stand. Ricky Gervais' character. While Allan insisted that my revulsion demonstrates how good Gervais really is, I maintain that if something causes you to turn off a show, that something cannot be construed as a positive. It was certainly a surprise to enjoy an American spinoff more than a British original.
Posted by laura k at 11/07/2013 05:30:00 PM