the harper government's vision of canada, in our passports and in our wallets

Some years ago, I analyzed the "Discover Canada", the most recent guide for immigrants studying for the Canadian citizenship exam. I compared the booklet to the previous citizenship guide, "A Look At Canada", and found within its pages the Harper Government's vision of Canada.

Later, we learned that the citizenship exam itself uses a significantly higher reading level than past exams, and functions as a barrier for many newcomers who wish to become citizens: "jason kenney gets his wish: the anglicising of canadian citizenship". 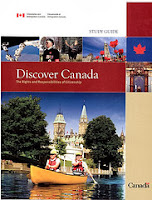 Canada is increasingly becoming unrecognizable to me. I don’t mean this just in an abstract sense, when I read about shameful things like Ottawa trying to avoid taking in refugees who have been tortured, because they require extra medical care. Foreigners who wake up weeping, with bone chips floating around their spinal cords, I hear you, Stephen Harper, these people are costly.

No, I mean Canada is literally foreign. Alert reader Martin Foster had emailed me about the details of our new passport, and I hadn’t believed him. But he is right.

The passport, good for 10 years and packed with security features so novel they’ll be useless by 2015, is now being mailed out. But which nation issued it? It is a distant country of which I know little. It is Harperlandia. 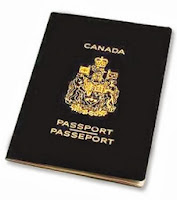 The passport contains 22 visual watermarks portraying the essence, the uniqueness of Harperlandia. There are, by my count, 98 images of males, six of females. There are various landscapes, from the north, the Prairies and Newfoundland, plus Niagara Falls. There are football players and hockey players, a warship, three war memorials, the RCMP and a soldier. But there is no image of Toronto or Vancouver and no aboriginal Canadian. Apparently only one Canadian verging on our lifetime (Terry Fox) has ever distinguished himself.

According to the government, we are white guys, rural, warlike and sporty, but not literate. Our landscapes are bleak, our buildings drab, our statuary undistinguished. These are not propellant images. In most, we are either stationary or plodding.

Many Canadians will never see the citizenship guide, and many do not have a passport, or may not look closely at the one they have. But almost every Canadian will have the opportunity - in fact, daily opportunities - to see the new look of Canada, each time they take out their wallet.

When I first moved to Canada, I loved the difference between Canada's currency and the US's. Not only is Canadian currency large and colourful in the European tradition, but it wasn't adorned with the stoic images of dead male leaders. Imagine, money that boasted of aboriginal artwork, and children playing hockey and skating on a frozen pond! I thought it was wonderfully Canadian. So doesn't it figure that the new polymer bank notes issued by the Bank of Canada feature a monument to none other than Vimy Ridge, the bloodbath we are told transformed the British North American colonies into Canada. (Much more on that subject coming soon.)

Apparently the Bank of Canada considered more modern symbols of Canada - and found broad public support for them - then rejected them.

The Bank of Canada considered celebrating gay marriages, black hockey players, and turban-wearing RCMP officers on its new plastic bank notes — but eventually nixed them all in favour of the more traditional images of a train, a ship and a monument.

Internal documents show that focus groups and a Bank of Canada team reviewed a series of currency images intended in part to reflect the diversity of Canada’s population, particularly the country’s varied ethnic character.

Images that were considered included a Chinese dragon parade, the swearing in of a new citizen, Toronto’s annual Caribbean festival, children of different ethnic backgrounds playing hockey or building a snowman, and a person in a wheelchair playing basketball.

Drawing on focus-group discussions and workshops with Canadians in six cities, the consultant found strong support for themes of “diversity, inclusiveness, acceptance of others/multiculturalism.” Eventually, 41 image ideas covering several themes were tested and given scores. 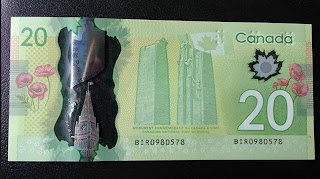 Many images proposed at the start of the process did not make the cut. Rejected were illustrations of a gay marriage, an RCMP officer wearing a turban, and “hockey with a twist … with a black player.”

The reasons for early rejection are not clear in the heavily censored documents, obtained by The Canadian Press under the Access to Information Act.

The images that were finally approved for the reverses of the five new bills — the last two denominations, the $5 and $10, are being released later this year — lack reference to Canada’s diversity of ethnicity, culture and colour.

In a future post, I will look at the rewriting of Canadian history that lies at the heart of Canadian Conservative project, as I write about at two books on that subject: What We Talk About When We Talk About War by Noah Richler and Warrior Nation: Rebranding Canada in an Age of Anxiety by Ian McKay and Jamie Swift.

For now, please enjoy this lighter take on the new citizenship guide by the good folks at This Hour Has 22 Minutes. Thanks to Dharma Seeker for the video and to Rachel A for the Mallick piece.
Posted by laura k at 11/05/2013 05:00:00 AM