sports without war: canada out of aghanistan, and military out of our sports 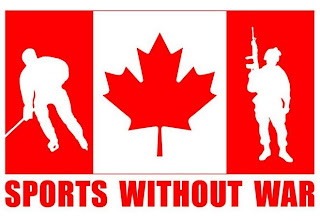 I have written a bit about the use of professional sports as a vehicle for war propaganda and militarism, such as when the Harper Government used the Olympic torch relay to promote its war in Afghanistan. My partner Allan has covered this ground more consistently, since he writes a sports blog. See, for example, his "Thoughts Prompted By The Red Sox Foundation's Association With "Run To Home Base"" and "The National Anthem And The Idea Of Respect", among others. These are mostly from a US perspective, since that's mostly where Major League Baseball is played.

Whether it's endless rounds of "God Bless America," (nationalism being the first stop on the road to war), the honouring of veterans who are always deemed "heroes," or in one case, a plan to distribute dog-tags to kids attending a game (dropped after protests), the continuing militarization of sports is a disturbing - yet largely uncontested - trend. When militarism is linked with sports, spectators of sport are turned into spectators of war. War becomes part of the entertainment. Fans of the game are expected to consume both forms of entertainment - to conflate the two, to see them as related and inseparable - and to do so unquestioningly.

Why is war glorified at a baseball game or a hockey game? Why is military worship associated with sporting events? Why should we accept this as normal and natural?

Have we come to see war as just another sport? Is there an assumption that the people who attend sporting events are especially receptive to military propaganda? Or is sport being used as the great leveler, the mass common denominator, the stand-in for The Public, those whose passive consent is required in order for the war to continue?

As both Allan and I have written in too many posts, questioning and challenging this norm is decried as "political," as in, "Why are you bringing politics into baseball? Can't we just enjoy the game?". On the other hand, the presence of militarism at a game, being the dominant view, is seen as neutral. But of course, it's not neutral. Every "hero" honoured, every flag waved, every resounding exhortation about the troops "protecting our way of life," is a conscious act, and a political one.

Apparently Canadians once saw this as a peculiarly USian phenomenon - but no longer. Given the nature of the Harper Government and the direction in which Canada has been headed, this is unsurprising. But we should still find it disturbing, and we should challenge it.

The current issue of Canadian Dimension magazine takes an in-depth look. In the lead story, "The NHL and the New Canadian Militarism: National Game, International Shame", Tyler Shipley works it out.

There was a time when the idea of military pomp at a Canadian sporting event would have seemed absurdly out of place — that was an American thing. Oh, how the times have changed.

These days, when you settle in to watch the Jets beat the Leafs on Saturday night, you do so understanding that there will almost inevitably be some kind of military spectacle on display. Maybe soldiers will rappel from the rafters to thunderous applause. Maybe there will be a moment of silence for our fallen heroes. Maybe Don Cherry will take us on an unscheduled trip to Kandahar in a jocular salute to the boys who are maintaining their team loyalties even while they keep us safe over there.

But wait — over where? Keeping us safe from whom? Doesn’t it matter?

Not according to the NHL, the CBC, or the countless franchises, broadcasters, sponsors and pundits who have made themselves a crucial component of the new Canadian militarism. Ours is not to talk about actual details of Canada’s military engagements, it is simply to “support the troops.” Those who question this mantra are told that while one may or may not agree with the particular deployments of the Canadian Armed Forces, we all have a responsibility to support the men and women who put their bodies on the line for us.

But the logic does not hold. Uncritically supporting the troops is a tacit support of their deployments especially since, in the first place, that support is premised on the notion that they are protecting us. That is, it requires that we believe that the troops’ particular deployments in Afghanistan, Iraq, Libya, Haiti, Mali and elsewhere are making us safer — a claim that is not at all self-evident. Moreover, the military celebrations at NHL games themselves make no effort to separate the troops from their missions, and it needs to be added that there are plenty of other Canadians — aid workers, doctors, nurses, activists — who also put their bodies on the line doing work that doesn’t involve killing, injuring or torturing anyone. They receive no similar tributes at hockey games. [Read more here.]

If you're Canadian and this interests you, please check out the new group Sports Without War.

Sports Without War (SWW) is a collection of sports fans, athletes, concerned citizens, and activists organized against Canada’s role in imperial interventions, occupations and military actions around the world, most notably, in Afghanistan.

In particular, we are opposed to the increased use of professional sports as an avenue to promote an imperialistic, pro-military politics. SWW aims to challenge pro-military messaging at sporting events and in sports media through targeted information campaigns, speaking events, and public demonstrations.

Professional sports and the sporting media is a pervasive part of our lives. As sports fans, we enjoy participating in the excitement and drama of seeing the world’s greatest athletes compete at the highest level. Nevertheless, we increasingly find our enjoyment of the games interrupted by blatant military propaganda, from the presence of recruiters at arenas and stadiums, to military-themed team uniforms, to the spectacle of troops rappelling from the rafters, to solemn services honouring their sacrifices.

These services ignore the many people - often civilians - who have been killed in the course of Canada’s war in Afghanistan. In so doing, they explicitly support the Canadian occupation, which has not been driven by humanitarian or security interests but, rather, by a collusion of corporate interests that prioritize profits over human lives. In the meantime, the Canadian government is spending billions of dollars on the war machine, while ordinary Canadians are struggling in the climate of austerity, job cuts, and wage freezes.

The realm of professional sport should be reflective of popular opinion, rather than actively seeking to promote an unpopular pro-military position. But military propaganda in sports is part of a broader project to build support for a new Canadian militarism, in a country where some 80% of the population opposes its most visible military occupation, in Afghanistan.

SWW is part of the larger pro-peace, anti-war movement and understands that while sporting culture can be accessible and unifying, it can also be oppressive and violent along a variety of social divisions, including but not limited to gender, sexuality, race, and class. We will endeavor to create a non-hierarchical atmosphere at our meetings and events, and we encourage anyone interested in promoting peace and justice to participate in our organizing efforts.

Folks from SWW recently leafletted a Blue Jays game, in protest of the so-called "Sunday Salute" to a member of the Canadian military. You can find them on Facebook.
Posted by laura k at 8/15/2013 05:00:00 AM