From Derrick O'Keefe at Rabble:

Yes, undefeated. Chavez, no matter how many times the corporate media and the cheerleaders of the status quo call him a dictator, was elected repeatedly with overwhelming majorities.

No matter how many times this slur is moronically or mendaciously repeated, people know the truth. No less than Jimmy Carter certified Venezuela's elections as amongst the most fair and transparent his organization has ever observed. And the voter turnouts that elected Chavez were usually far, far higher than those in the U.S.

The voices that cheer and mock the death of Hugo Chavez are in fact mocking democracy and the people of Venezuela, who elected him and who have re-elected him time and time again -- most recently by a decisive majority in October, 2012.

But today we need not dwell on the disgusting carnival of necrophilia with which the right-wing has followed Chavez's illness and which will reach a crescendo in the coming days with the news of his untimely demise. This macabre celebration is only the flip side of impotence; they whoop and holler at Chavez's death from cancer only because they failed to defeat him in life, and could not take down his government by democratic (or other) means.

So let the corporate media say "good riddance!" to Chavez in their cynical way. Ignore them, and watch (or rewatch) the inspiring story of the People Power that defeated the 2002 coup, as told in the powerful Irish documentary The Revolution Will Not Be Televised. The title is a tip of the hat to Gil Scott-Heron, and it's a reference to the key role that right-wing, private, big media played in orchestrating and manipulating events and their portrayal during the failed attempt at regime change. (Another important source of information about Venezuela is the website Venezuelanalysis.com)

The rich and powerful of the world did not hate Chavez because he was a dictator. Deep down the sentient among them know he wasn't.

They hated him because he was symbolic of a threat to the dictatorship of Capital, a figurehead of a continent alive with social movements and millions of people conscious of their political power. [Read more.] 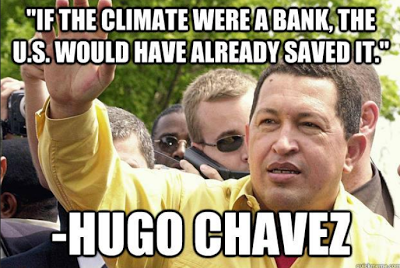