caterpillar is bulldozing canadian workers. workers are fighting back. 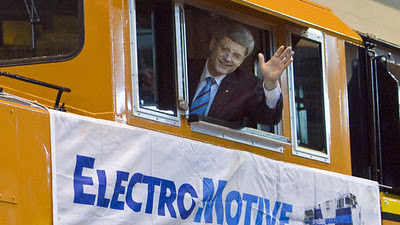 "So long, good Canadian jobs!"
Electro-Motive, a subsidiary of Caterpillar Inc., a huge US company, has locked out 465 workers from its London, Ontario plant. The company has offered a take-it-or-leave-it contract that includes a pay cut of more than 50 percent: from a good middle-class wage of $35 per hour to a substandard $16.50 per hour. The new contract would also devastate benefits and pensions - while the company has reaped billions in profit and a 20 percent increase in production over the past year.

And what a surprise, the company has connections to the Harper GovernmentTM.

“This is a dispute between a private company and the union and we don't comment on the actions of private companies,” Harper spokesman Carl Vallée responded Wednesday in an email.

The Prime Minister showed no such reticence on Mar. 19, 2008 when he visited the Electro-Motive plant to showcase a $5-million federal tax break for buyers of the diesel locomotive-maker's wares and a wider $1-billion tax break on industrial capital investment.

“The Prime Minister's [2008] announcement related to the government's tax policies for all companies,” Mr. Vallée said in the email. “A low tax environment is the best way to ensure job creators come to Canada and stay in Canada, as proven by the nearly 600,000 jobs created in Canada since July 2009.”

A spokeswoman for Labour Minister Lisa Raitt repeated the same talking points in an emailed response.

When it was pointed out that Ms. Raitt aggressively intervened when privately-owned Air Canada was at war with its unionized workers last year, Ashley Kelahear responded that the Electro-Motive dispute “is in fact a matter of provincial jurisdiction.”

Ken Lewenza, president of the Canadian Auto Workers, which represents the unionized Electro-Motive employees, said the Prime Minister has a duty to make his views known.

Mr. Lewenza, fresh from a visit to the picket line at the London plant, said retirees and other workers there recounted Harper's 2008 visit.

“Mr. Harper went around, shook workers' hands and indicated to workers that they had a great future as a result of his announcement,” the union chief said in an interview.

“For him to pass this on as a bargaining dispute between the employer and the union is ridiculous. How do you hand a [corporate] partner a nice big cheque and then say, by the way, there's no ground rules relative to the cheque.”

Questioning unions has become a staple of the Conservative party's fundraising pitches over the past year and Mr. Lewenza wondered aloud whether Ms. Raitt and Mr. Harper would remain quiet had the CAW demanded a 50 per cent share of all Electro-Motive profits at the bargaining table.

“The prime minister of Canada and the minister of labour would very easily denounce that kind of aggressiveness of the union,” the CAW president said.

“For him not to stand up when the role is reversed, quite frankly, is abandoning Canadian workers – and I don't care if it's unionized or unorganized.”

Mr. Lewenza says Caterpillar's lead negotiator, with 37 years at bargaining talks, conceded he had never before proposed such dramatic cuts – nor ever heard of similar demands being made elsewhere.

“This is unprecedented in every way,” Mr. Lewenza said, “and admitted so by Caterpillar themselves.”

Lewenza is right. It doesn't matter if you're union or non-union, private sector or public. Workers are under attack everywhere, in all industries, all over the country and all over the globe. Employers are collaborating to strip workers of salary, benefits, pensions and rights. The only way to fight it - the only chance, the only hope - is to unite, to use our collective power to push back.

I'm sure that right now, in the comments sections of news stories on all the Canadian media websites, people are trashing Caterpillar workers, calling them greedy and claiming that in today's economy, no one can expect to earn the princely sum of $35 an hour. But unless those people are paid government operatives, they are arguing against their own interests. It doesn't matter if you have a job that pays a good middle-class wage of $35 an hour; it's still in your interests that those jobs exist. Good union jobs set the standard for all workplaces. Without those jobs, it's a race to the bottom. Why do you think corporations (and the governments who support them) are so interested in breaking unions?

This isn't about union vs non-union. This is about job standards plummeting - about our ability to lead decent lives. Could you afford a 55 percent pay cut? Could you continue to pay your mortgage or your rent and still feed yourself and your family? Do you want to work simply to scrape by, always anxious about paying bills, trying to figure out how to stretch your budget to your next paycheque? Or do you want a life that includes a bit of leisure time, a decent holiday, the ability to, say, give your kids piano lessons or skate time or an Xbox?

Our standard of living is falling. But this isn't gravity at work. This is not something natural and inevitable. This is an organized assault on workers, as corporations try to maximize profits by cutting labour costs. It's not the workers who are greedy!

The labour movement is coming together to fight back. The Ontario Federation of Labour is calling on members from all unions and all sectors to rally in London on Saturday, January 21. You can join them. It doesn't matter if you have the good fortune to work in a unionized environment: this still affects you and you can join the fight to stop it.

From Sid Ryan, President of the OFL:

This is pivotal moment in the history of labour! Employers of all types in the public and private sectors are collaborating in an aggressive assault on decent paying jobs, good benefits and retirement security. The consequences could mean the destruction of the middle class and a ballooning of the working poor. Everywhere we turn, employers are seeking major concessions from dedicated workers that are designed to convert good jobs into precarious and temporary ones. The same issues have recurred again and again over the past two years at U.S. Steel, ECP, Vale Inco, Canada Post, Air Canada, and even the City of Toronto. There is no doubt that greedy foreign-owned companies like Electro-Motive/Caterpillar and others are attempting to set a precedent by exploiting Canada’s lax labour laws and shameful domestic investment protections to break unions and usher in a new era of precarious work and record corporate profits.