the empire writes back, or, in which the u.s. govt lies to us on paper

You all remember when my border-crossing troubles began: "the gray area": in which i am detained, harassed and threatened at the border. And then continued: border crossing take 2. And so on. The routine - surrender the keys, armed escort into the waiting area, pointless detention, release - continued for just under a year.

Allan filed a request for information about an "adverse border crossing experience". Then, after almost a year of hassles every time we crossed the border, we had one normal crossing last US Thanksgiving, and I recently had another, on my own in Pearson Airport.

Imagine my surprise at checking the mailbox - paper mail, our home address - and seeing the Department of Homeland Security in the return address! For your entertainment, here it is. 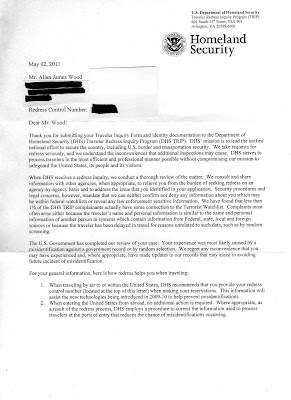 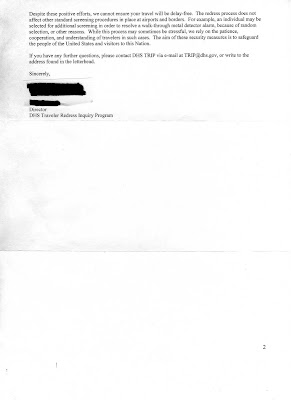 Your experience was most likely caused by a misidentification against a government record or by random selection. ...or because you used your passport to help a friend who had deserted from the US military, about which we interrogated you in November 2009.

Were the two hassle-free crossings flukes, or has the flag been lifted? Next week we're seeing the Red Sox in Detroit, so we'll take the letter and the other paperwork, and hope for the best.
Posted by laura k at 5/20/2011 06:00:00 AM